We've Forgotten How To Listen To Plants 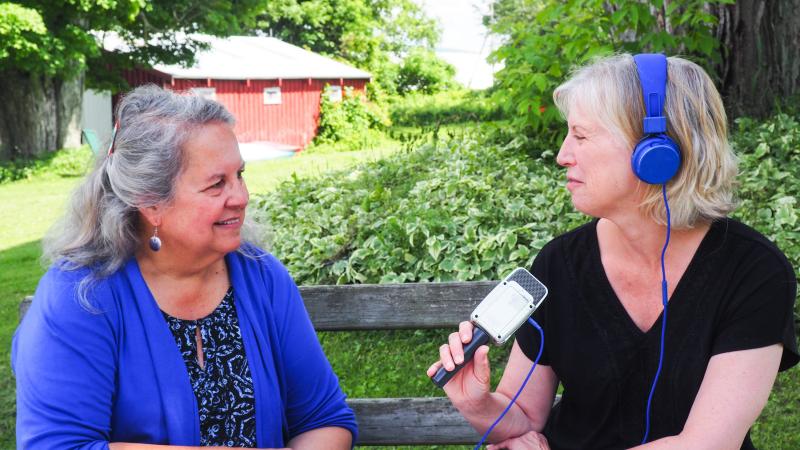 Every day we see dozens of other living beings — humans, but also dogs, birds, trees and insects. What if we regarded all these fellow creatures not just as animals or plants, but as "persons?" In many Native cultures, they’re considered relatives. And there’s an emerging movement of scientists who talk about our "more-than-human kin."

One of the leaders in this field is Robin Wall Kimmerer, a professor of environmental and forest biology at the State University of New York and the bestselling author of "Braiding Sweetgrass." She’s also an enrolled member of the Citizen Potawatomi Nation, and she draws on Native traditions and the grammar of the Potawatomi language, Anishinaabemowin, to formulate a new way of ecological thinking.

In July 2019, Anne Strainchamps and Steve Paulson visited Kimmerer at her home on 7 acres of hilly land near Syracuse, New York to talk about the personhood of nature.

Robin Kimmerer: When I say that this aspen tree is a person, I mean it. And all those elements that you just mentioned — yes, this is a sentient being, a conscious being, a being with its own intelligence. You know, Western science tells us, "Oh, you must not anthropomorphize." I'm not anthropomorphizing, I'm botanizing. That aspen is its own kind of person. It's not like they're human people. They're aspen people.

Anne Strainchamps: Looking at that beautiful maple over there, is there a way to explain its personhood using Western scientific language?

RK: Could I prove to you with scientific instruments the sentience of this maple? No. But the science is moving absolutely in the direction of having us understand the intelligence of plants. There are, of course, emerging tools that tell you all about the electrochemical gradients in this maple and what they respond to in the way this tree senses, behaves and makes decisions that are so sophisticated and beyond even our knowing.

I would also say that the ability to sense what's going on around you with all these other intelligences is something that seems very foreign to us today — like, "Oh, that's some crazy supernatural thing to be able to listen to trees or to talk to trees." But we're told in our traditional knowledge that everybody used to be able to do that — like the way some people can read the clouds to know what weather is coming. But we have forgotten.

AS: I love your concept that our society has become "plant blind," that our grandparents could identify many more species of plants just sitting here in the backyard than their grandchildren.

RK: It was a matter of survival. We are hardwired to know plants. When you think about the hundreds of thousands of plants that there are, you had better know which one is medicine and which one will really give you a stomachache.

So much of who we are is a legacy of needing to know plants. And it's just this eyeblink of time in the industrial age that we have become plant blind.

AS: You've been studying the Potawatomi language, Anishinaabemowin, and you've written about how some of this knowledge is embedded in the language.

RK: It is. If we think, for example, of that grapevine climbing on the pole over there, I would say to you, "Hey, Steve, look at it." If Anne was there, I would say, "Look at her." We have a different language for each other, but all of nature gets termed "it." And in English, we have no escape from that.

It's the manifestation of that worldview which objectifies nature, but in Anishinaabemowin it is not possible to speak of that robin or that strawberry as an "it." It is not possible because we speak with a grammar of animacy.

RK: Exactly. And it's a verb-based language. One of my favorite examples is that you hear the wind with an animate verb, but if an airplane went over, we would hear it with an inanimate verb.

Most of our language is verbs. About 70 percent of Anishinaabemowin is verbs and 70 percent of English is nouns. It’s this notion of living in a completely different world, a world which is alive and that you are related to.

SP: What does the word "kin" mean to you?

RK: I was doing a thought experiment about how we might animate English. And with the guidance of my language teacher and elder, I was looking for another pronoun that we could use and he gave me a word in our language. "Aaki" means the Earth and I’ve been suggesting we could use that little sound "ki" as a replacement for "it." So when we look at that grapevine, we say ki is climbing the fence. So it slides right next to "he" and "she." He, she and ki.

I played with that idea for a long time, and then I realized that you need plurals and that we already had that beautiful word in English of "kin." And it's so happy making, isn't it? It just changes your whole orientation.

AS: How did we forget all of this? The language and the worldview that you're describing has probably been here for millennia, before European settlers showed up.

RK: The change of worldview was not a passive forgetting. This change of worldview from the industrial colonial frontier mindset to overlay the indigenous way of knowing was no accident. It was very, very deliberate. If you came into a world where you saw those pines were people, teachers — ones who were giving you medicine, who were caring for you — would you come in and claim every damn one of them for the king of England? Would you devastate the landscape?