Listening to the Mother Trees 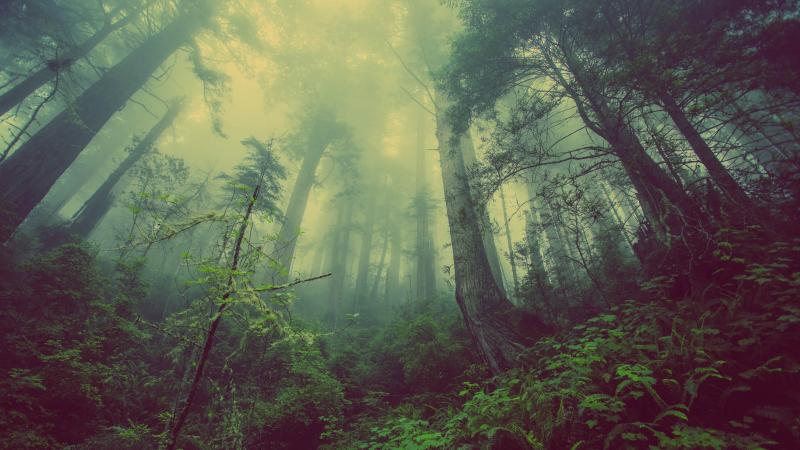 Ecologist Suzanne Simard discovered a way trees talk to each other, using an underground network of fungi to form tree communities.

She compares them to human communities, and says the healthier a tree community is, the better the individual tree, just like people. Also like humans, "mother" trees take on a role of regeneration and nourishment of younger trees.

"To the Best of Our Knowledge" host Anne Strainchamps met Simard in a forest in 2014 to talk about this natural connection.

Anne Strainchamps: How did you get into forestry?

Suzanne Simard: My family came from Quebec and moved across and settled in the inland rainforest of British Columbia. My grandfather and my uncles all horse logged. Every summer we would spend in the cedar hemlock forests that were so rich and diverse and huge playgrounds for kids that just became part of me.

I think I was always wired for forests and wired for Earth, so it's just a natural calling.

AS: When I’ve read popular articles or blog posts of your work the headlines often say, "Trees talk." Do you think trees can communicate?

I look at how trees are connected below ground by these mutualistic fungi called mycorrhizal fungi. You can think of them as extensions of the root system. The plant or the tree depends on that fungus to go out and explore the soil and the fungus goes and explores and grows into all these little teeny tiny niches or accesses nutrients that are unavailable to the tree.

AS: So is this like a secondary or subsidiary root system?

AS: Wait, under a single footstep?

SS: Yes, under a single footstep.

The way that communication happens is that through these mycorrhizal networks that link tree after tree after tree they send resources back and forth. When I say resources I mean things like carbon, nitrogen, phosphorus, water, defense signals even.

They all send resources or nutrients out to trees that might be struggling under stress — we've seen that the more shaded one tree is, the more other nearby trees will send them sunlight.

AS: So the trees are helping each other?

SS: Yeah, it really turns upside down how we've traditionally thought and managed forests. And we still manage them to this very day on this competition model, that there are individuals competing for resources. But what I’ve found is that they're all connected together and that they're sharing these resources. It doesn't mean competition is not going on as well, but there's a multiplicity of interactions.

We found that every tree was connected to every other tree, and the bigger and older the tree the more connected it was. So those trees we called them mother trees or hub trees. We called them "mother trees" because what we also found was that the young seedlings were regenerating within the network of the mother tree. Think of this like a huge brain growing out through the forest from the single tree.

SS: Yes. We've actually found that the patterning of the network is just the same as a neural network.

AS: Now I read that you said somewhere something about when a tree like a mother tree gets ready to die it will deliberately pass its resources onto its children.

SS: We have this thing called "kin recognition" in animal species, and we're discovering that there is actually kin recognition between plants. We've done some experiments to show that these mother trees will actually send more carbon to genetically related individuals than strangers. So, that means that the mother tree is nurturing her young to pass on her genes to future generations.

AS: It's a pretty powerful lesson in terms of resilience also, isn't it? I mean I would think would apply to human beings too and for the last decade or so health researchers have proved that people who have strong social networks of friends and family live longer and are healthier. Sounds like the same thing is true for trees.

SS: It is true. So the more connected those trees are, the more diverse and locally adapted the community is, the better off it's going to be.

I'll just tell you my own personal experience.

I had breast cancer a couple of years ago. I'm doing great. But the thing that really got me through was my connections, the friends I made. It was this incredible magical network where you could just feel the love going from person to person, and we're all doing great. For me it was like I was living the very thing I was seeing in the forests. And I just feel so much comfort. I know I'm going to be OK, just like that tree is going to be okay as long as it stays within its community.