What Do You Owe The Mountains Around You? 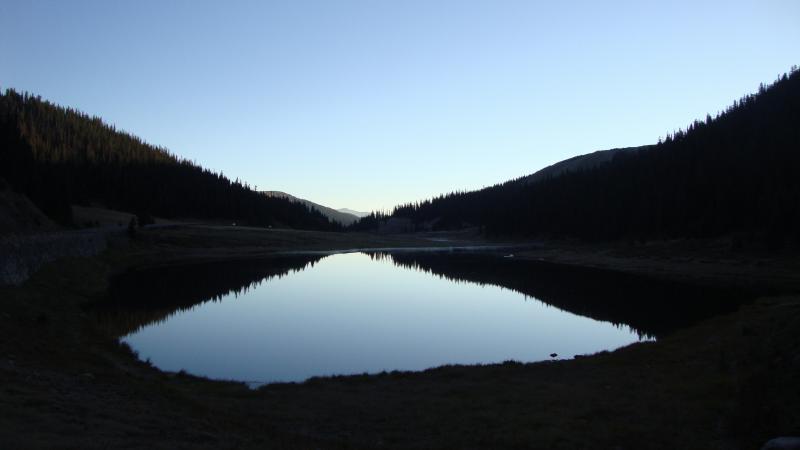 Poudre Lake is the headwaters of the Cache la Poudre River and signify the east side of the Continental Divide. Photo courtesy of the U.S. National Park Service

"I grew up in a multigenerational alcoholic family, and it was very difficult, but my uncle had a place up in Quebec that (we would escape to)," said Hausdoerffer.

He and his family would hike all summer and ski all winter.

"That was a place where our family was healthy," he said.

It was a tradition they maintained even after Hausdoerffer's father left — his mother, on top of raising five kids on her own with a teacher's salary, would work weekends as a ski instructor to earn free passes for the family.

"It was truly an escape for me," says Hausdoerffer. "And I think in a lot of ways kind of saved my life so that when it came time to go to college, I moved West in search of bigger mountains."

That search brought Hausdoerffer to Colorado, where he's the dean of the Clark Family School of Environment and Sustainability at Western Colorado University. His work in environmental ethics examines how we’re connected holistically with the spiritual, cultural and environmental histories of where we live.

"Environmental ethics insists that we are wholehearted beings capable of understanding and caring for the complex local and global systems that sustain us," writes Hausdoerffer.

He's also a bonafide mountain man. He has "a little shack" built on a former mining claim on Terrible Mountain in Colorado, sitting 10,000 feet above sea level. Hausdoerffer spoke with Anne Strainchamps for "To The Best Of Our Knowledge" about how mountains feed the world around them, and how mountain living can connect us to past and future ancestors.

Anne Strainchamps: I think for those of us who really only visit mountains, we tend to think of them mostly in terms of how tall they are. But you're talking about them as an entire system, right?

John Hausdoerffer: I live in between the San Juans, the Elk and the Continental Divide, and they're the source of everything. The water of the West starts here. It's the basis of life for the riparian ecosystems across the dry West, for indigenous communities across the Southwest, the power, energy and water for Las Vegas, Phoenix, L.A.

Snow is life. When my kid was really young, she suggested snow was God. I said, "What are you talking about?" She said, "Well, it's the source of everything that lives. And you feel like you're flying. You feel like you're in heaven when you're floating down it. Isn't that God?"

It's powerful stuff. I will say that snow is my moral barometer — if my grandkid is taking their kid to ski Yule Pass and there's snow there, then the work my generation did meant something.

AS: How endangered is snow? I mean, not just where you are, but all over?

In the high mountains, it varies. We know that Gangotri Glacier, which is the first trickle of water of the Ganges, is receding by tens of meters per year. In fact, in the traditions of Hinduism and their creation story, snow has a role. And Gangotri Glacier, it looks like a cow's snout. And out of it comes this milky colored water, seen as like the mother's milk of the sacred cow of the Hindu people. When I finally trekked to Gangotri Glacier, there was a very nice man who came up to me. He was an accountant from Chennai on his pilgrimage, and he was tearing up. I asked him if he was okay. And he said, "It's just very sad. It doesn't look like a cow snout anymore."

But you can't quantify the loss of a man saying his spirituality has been disrupted by climate change, not just how much water will be in the tap.

AS: You do a lot of partnership work, trying to build connections between mountain communities all over the world, kind of like the "sister cities" concept. If folks in Telluride suddenly feel solidarity with a village in the Himalayas, what changes?

JH: I'm really glad you used the word "solidarity." I've always had a lot of hope around snow as a basis of solidarity. Those of us in the Rockies living with a degree of affluence, we're not the experts. Those who live with the consequences of my comforts have far more expertise than me with my PhD and gang of grad students. It's incredibly difficult and vital to bring together not just different data, but different ways of knowing and understanding what makes mountains sacred. How do we quantify, qualify and build solidarity around protecting the sacred as a global mountain community?

AS: You mentioned that you and your wife have a piece of land up at 10,000 feet — it's a place called Terrible Mountain in Colorado. Legally, you own it. But obviously you're trying to think very differently about what ownership means. You've written that you're trying to think of it as almost like the mountain owns you, or at least that you belong to the mountain. So what does that look like in practice?

JH: I've always wrestled with what my position is on this place called Terrible Mountain. The history is it's Ute Indigenous homeland, and in the late 1800s prospectors — I see them as invaders — illegally came into the Ute homeland to start prospecting for gold. They were killed by Utes, who were defending their homeland. Within a decade of that, there were 5,000 people there. Within two decades, there were a hundred.

It's named "terrible" because of that boom-bust economy of the area; silver and gold had tapped out too quickly. And that's the framework for Terrible. The population has not gone over a hundred for a century, and (the population is) people like me who are trying to escape. I think there's still a kind of colonialism there. I'm there to extract from someone's homeland to escape from a very problematic society and economy.

I do my best to practice kinship there. For example, a tree disease was spreading across the aspen community. When you look at an aspen forest, it's all one organism. So each tree is like a finger on your hand. Underneath is a tuber. And when you don't have disturbance, you don't have fire, the aspen tuber can die. So there was disease spreading and we wanted a place to put our shack. So we disturbed by cutting the trees that were diseased, and now around the shack are young aspens from a regenerated tuber.

There's a thinker named Enrique Salmon who has a term called "kincentric." That is to act in such a way that you're not just doing less bad — like conservationism saying, "How do we not overuse the wood?" — you're advancing good as a member of that place. You're co-creating wildness with that place.

AS: Wow. So instead of just picking the spot with the best view for your cabin, you picked the spot where if you built the cabin and took down some trees, it actually would be good for the forest and heal it.

JH: Yeah. So that cabin is heated by part of what it’s built from, it’s cleared from an aspen grove that was dying and being overcrowded by spruce. And the spruce went into building materials, the aspen grove went into heating, and the clearing regenerated the tuber.

AS: That's just kind of beautiful.

JH: It's environmentalism that goes beyond doing less bad to ask, how can I be a member of this family and what is my response? Not what are my rights on this land as a property owner — what are my responsibilities? We're owned by the responsibility. We don't own the right.

AS: You've given us so much to think about. Is there a particular kinship practice you might recommend for anyone who might be, say, heading into the mountains?

JH: Well, if you can find snow or the source of water, whether it's snow or a spring, I would recommend just sitting with it. If you're on the east of the Continental Divide, think about what that water goes through ecologically, culturally, economically, socially — who and what it serves before it gets to the delta in the Gulf of Mexico. If you're west of the Divide, think the same for the Colorado River all the way to the Gulf of California.

Just let that trickle make you present. Feel the cold of the snow. Listen to the trickle of the water. And whenever a thought distracts you, return to the cold of the snow in your hand, return to the trickle of the water you hear and just breathe with it. Start with that moment, once you’re present to the place and the moment, then let yourself go to 30,000 feet and imagine the system and what it’s asking from you.

You'll learn how to be a good ancestor. The answer is in the land, in the mountains, which are the sources of life.