The Wisdom of the Corn Mother 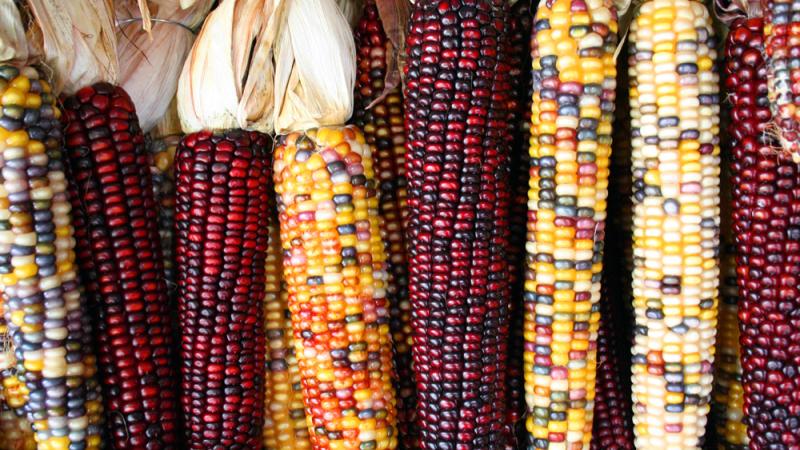 Botanist Robin Wall Kimmerer says there is a reason so many around the world consider corn to be sacred. We give it life, and in return, it gives us life. Kimmerer says the industrial-scale farming of America has lost control of that balance.

Kimmerer is an enrolled member of the Citizen Potawatomi Nation. She says modern farming must learn the wisdom of indigenous farming for American agricultural to survive. Anne went for a walk with her on her farm to talk about corn.

Anne Strainchamps: I'm standing with Robin Wall Kimmerer in front of her vegetable garden. We're in upstate New York, where she lives in an old white farmhouse. You can see her neighbor's big red barn and cornfields across the road.

Robin is a botanist and plant ecologist. She lives and works at the intersection of two very different traditions: scientific knowledge and indigenous wisdom. Robin's an enrolled member of Citizen Potawatomi Nation. She can't look at a cornfield or a bean plant without thinking about the history of colonization and genocide. About the deliberate erasure of plant biodiversity.

For example: take corn. Robin works with tribal leaders to preserve native varieties of heirloom corn. Along with an entire worldview.

Robin Wall Kimmerer: Oh my goodness. The corn world. I have been so privileged to see some of the corn "archives" if you will. Jar after jar after jar. Hundreds and hundreds of kinds of corn, from little, tiny, red, strawberry pop corns to great big purple and white flour corns. The dent corns and the flint corns. Every color and pattern. It's extraordinary.

AS: And so what's the difference between GMO corn and the kind of heirloom corn that you're planting?

RWK: Sovereignty. The heirloom corn of the seeds that were gifted to me by indigenous farmers? That's free corn. And by free I mean sovereign, independence corn. It's not colonized corn. It carries all of its own genes, first and foremost. It is itself. It is an untrammeled person. In terms of the physiology of the plant itself, it's much more nutritious, has much higher protein, much higher vitamin content than contemporary GMO corn. Tastes better too.

AS: Yeah. It seems like we we have corn because of indigenous scientists, really. Who co-evolved it.

RWK: Yeah that's absolutely true. It's a wonderful example of reciprocity between plants and people. Corn made people and people made corn. They are one of our deepest, oldest relatives.

When we analyzed the bodies — particularly of Americans, looking at our tissues — you know, they call us "walking Fritos" because corn fixes carbon in a particular way that leaves a signature in our own bodies. If we ate only wheat we would be differently composed. We are people made out of corn and it shows in the chemistry of our bodies.

AS: I'm really fascinated by the kind of underlying feminine archetypes that are associated with corn. You referred to "corn goddesses" that are part of creation stories. And the current indigenous movement to preserve heirloom seeds is referred to as "re-matriation." How come?

RWK: Well, for one, wheat corn is understood as the "corn mother." In almost every culture of corn-growing people, [they] refer to her as the corn mother. There's so many reasons for that, but primarily because she takes such good care of us. And when you look at an ear of corn, what makes the corn different from the grasses from which it was domesticated is that every one of those seeds is a baby. Every kernel is an offspring. It's a baby, and they're all wrapped under those blankets. The corn mother cares for her own seeds like a mother. That's why corn is so sacred, that she gives us her children in return for us protecting and caring for those children, and planting them again. Because part of the magic of corn is that with all those babies, with all those seeds held in that husk, there is no way that corn can re-seed itself. There's no such thing as volunteer corn in your garden — it has to be planted. And we're the ones who do that. And that's that closeness.

AS: And when you talk about traditional methods of harvesting, there's a phrase: "save the best and eat the rest." Which means that if you're saving the best kernels — the best seeds — to plant, the corn that results is going to carry those long lineages. As opposed to a plant that has been genetically engineered and manufactured in a laboratory. What is that, like in vitro fertilization?

RWK: It is, in fact some of the language by which those foreign genes are put into corn? Some of that is the forcible injection of foreign genetic material.

AS: When you look at a field of, I don't know, your neighbour's GMO modified corn — do you think of that? Do you see rape?

RWK: I do. If you just look across the valley. When you see all of those corn plants, absolutely uniform, standing in straight lines, shoulder to shoulder on soil that has been poisoned to kill any other relatives who might be there..that's a really painful thing. Corn was always understood by our people as family, as kin — you could only speak of her with animate grammar. She was known as our mother, a sacred being. Now [it is] simply understood as an industrial commodity, and that is the colonial worldview. That change from seeing the land as full of life — seeing personhood, intelligence, generosity in the land — to see only productive capacity. That is the travesty of the Western worldview, manifest in agricultural crops.

AS: It also makes me think it's the same habit of mind that produced slavery.

RWK: Yes, in that context, you're exactly right. Which is not to draw false parallels between the tragedies of human enslavement and the treatment of our plants. But it is exactly the same mindset. You're right. And again, it's tied up with the notion of who gets to be a person. Corn does not get to be a person in the Western world view, just as African slaves did not get to be persons under colonial and slavery regimes.

AS: What is the mental or emotional work you do to be able to walk through a world, look at fields like that, and see both real and psychological violence? A long history of it. You see it more acutely than probably any of your neighbors.

RWK: Yes. That is the reality. And your question and your openness and awareness to that is really important because the notion of historic trauma, that understanding is alive in the world, but it is ongoing trauma. It is ongoing violence against a way of knowing, and the plants and the other beings, yes. But you know at the same time, that means that the privilege of doing this work is all the more beautiful because it matters so much.

AS: And there's such a hunger in the world right now because we've been so depleted of exactly what you're talking about, living in a world that's filled with meaning, surrounded by our sacred kin. We are so spiritually undernourished today. So, in that sense, you're healing.

RWK: And you know the some of the very oldest teachings of Anishinaabe peoples, and many peoples around the world, are to say that despite land dispossession, despite attempted genocide, despite the boarding schools, despite removal, termination, relocation, despite every single policy in this country that are being replicated around the world to make Native peoples disappear, we are still here. And that is a miracle. That is a miracle.

And our elders told us that there would come a time when the whole rest of the world needed the teachings that we had held on to. And that time is now. And to look at a world that is much older, much more morally satisfying, spiritually satisfying, nourishing to the body to help people understand that it's already here. You tried to make this disappear. But it's still here. It's the seed. The seeds are still here, our people have been faithful to the seeds of culture, of language, of spirituality. And if you just get out of the way and let them grow, it would be enough to feed all of us.