Putting The Mood Of COVID-19 To Music 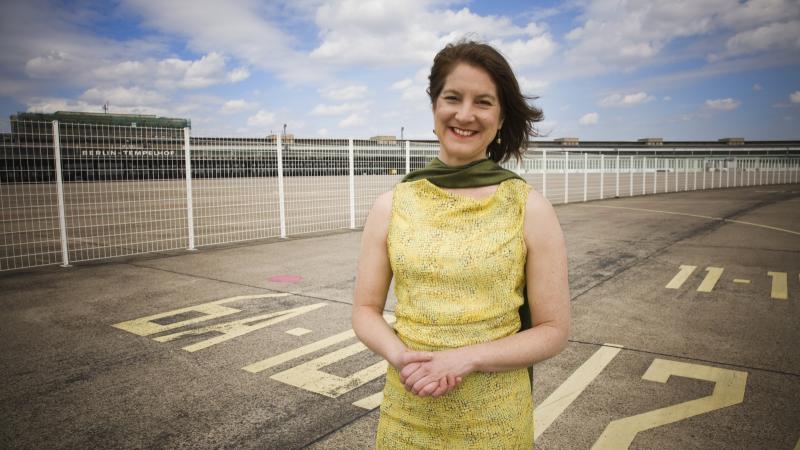 Composer Lisa Bielawa frequently organizes large-scale performances for audiences to react to, but her latest undertaking, "Broadcast From Home," asks listeners to react to the moment, so that their reaction might be shaped into song.  Photo by Daniel Clark and courtesy of Lisa Bielawa

New York City composer and musician Lisa Bielawa felt a sense of loss as the reality of COVID-19 hit her personally.

Yes, her own live performances around the world were postponed or canceled, but perhaps more devastating, the way all people create music together — singing in choirs, practicing in ensembles, playing for packed auditoriums or small local performance spaces — was forbidden as part of the social distancing necessary to stop the spread of the virus.

While the coronavirus has had many terrible impacts — medical, financial and emotional — the quashing of the live, communal making of music, just as we need it most, seemed particularly cruel.

Then a friend who was sheltering in place in Westchester, New York, sent her a text:

"After more than a week of being at sixes and sevens, not caring about all the inside things I love to do. Where was music? Where was reading? Why wasn’t I cleaning closets? I finally succumbed to days of staying in bed…fearing that this lassitude might never end. And remembering my advice: Give in to what your spirit is telling you. It’s not forever! That other you still exists."

Bielawa thought this was so beautiful, she wanted to put it to music. And she wondered what other people, stuck in their apartments and houses were thinking.

So she created a collaborative musical project, Broadcast From Home, with the Kaufman Music Center in New York City. Anyone is invited to go to her website to contribute in one of two ways, either recording themselves singing, or by writing a short testimony — a reflection of their inner thoughts. The voices are the melodies and the written word the libretto. Bielawa is putting the words and music together on a rolling basis, a chapter a week, and releasing it to the world.

Through Broadcast From Home, which began earlier this month, Bielawa is both finding a way to create new music in a difficult time, and to capture the ethos of this moment through the voices and words of people all over the world experiencing the trauma of this moment, all at once.

Each week so far has shown a collective personality and mood, she said, much like the stages of grief.

"What I’m discovering is that each week there is a different kind of distilled emotional state — that I know from my own experience, (from) talking to people, and from just thinking about it — that many people must be feeling each day," she told Anne Strainchamps of "To the Best of Our Knowledge."

Week one, "That Other You Still Exists," was all about disorientation, a surreal feeling of shifting gears.

Then, Chapter 2 took on a more somber tone as Bielawa and many others began to lose friends and family to the virus. That chapter, "Tiny, Powerful," is dedicated to a friend of hers who died after contracting COVID-19.

Now working on Chapter 3, Bielawa said it has taken on a sense of irritation, disgruntlement, like people snapping at each other who aren’t standing 6 feet away from each other at the grocery store. There’s some humor in it. But it’s also complex.

"The range of human experiences is quite vivid right now," Bielawa said.

She hopes more and more contributors will hear about the project and come to the site to sing or send their words.

"I’m listening," she said. "And I’m humbled by the fact that people are sharing these. This is very tender. To be seeing all of these beautiful, lovely voices, so many different kinds of voices, different ages … I can see they’re coming in from South America, from Kenya, the UK."

Some of what she’s doing now feels familiar, and reassuring, bringing community together to make music. Bielawa thinks of it as ministry.

"Composers from all times would have felt this way," she said. "I’m honoring peoples’ experiences right now."

But what is different, and groundbreaking — and perhaps not possible without this strange pandemic time — is that she is not creating the music and then waiting for the audience reaction. It’s the opposite. By crowdsourcing the singing and words, week by week, as we live through this together, Bielawa first discovers what the audience is feeling, and then shapes it into music.

She can’t predict exactly what’s ahead for the next chapters, but she’s confident the community will let her know.

"I want this project to be able to go wherever we’re going, no matter how difficult that is," she said. "It’s going to be a real tapestry of peoples’ states of mind. They’re my collaborators. I’ll go where they take me."

To submit your own testimony or performance, check out the website for Broadcast From Home.