A Woman Is Struck By Lightning. Did She Meet God? 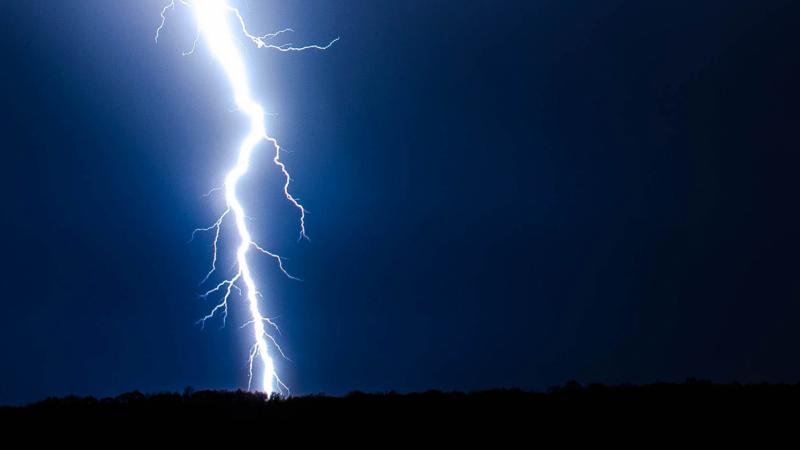 For many people, religion is like the air you breathe — you're immersed in it, anchored by it, you take it in as a fixture in your daily life.

You attend church as a family and your shared belief is part of the culture that shapes and knits together your community.

But what’s the original spark for the religious traditions? Sacred texts often contain stories of miraculous events that inspired faith in the divine. So by that logic, it had to start with someone having a real-life experience with the completely unexplainable, right?

Elizabeth Krohn is one such person.

In 1988, she stepped into the parking lot of her synagogue with her two young children in tow when she was struck by lightning — and survived.

"I can remember glancing at my left hand and noticing that my wedding ring was touching the metal shaft of the umbrella," Krohn told us. "A tiny little tine, branching off a larger bolt of lightning, touched the tip of the umbrella. And then the larger bolt hit. It was like being inside of an exploding bomb."

Krohn then realized she was observing all of this from afar, seeing a smoldering umbrella on the ground and her own crumpled body, with her burned shoeless feet, while her children looked on in terror. Despite the horror of the moment, she remained calm during this out-of-body experience.

Krohn said she can't explain what happened next. She saw a bright inviting light that beckoned her to a distant garden world.

"It happened to me. But I can't explain it," Krohn said.

"The plants, the flowers, the colors, the aromas, the other-worldly music just filled my senses with peace and contentment," Krohn said. She was instructed to sit on a bench, where she felt overwhelmed with unconditional love.

Tracking unworldly spheres in the sky, Krohn said she believes she sat on this bench for two weeks, in which time she claims to have been instructed in all sorts of spiritual knowledge: the uniqueness of each person’s experience of heaven, the mechanics of reincarnation, even "the nonlinear nature of time."

Krohn said she was offered a choice either to stay in this paradise or return to her life — and her young boys — back on Earth. In the parking lot, those two weeks had elapsed within just two minutes of time on Earth, just enough time for synagogue members to rush to her aid.

Krohn spent the next few months recovering from her injuries, sleeping a lot — and having very peculiar dreams.

"I would have a nightmare about a plane crash, and then I would see it on the news the next day. Information about earthquakes, tsunamis, other disasters would come to me. And then they would happen," Krohn said.

Krohn didn’t believe her own divinations, so she started sending herself time-stamped email summaries of her dreams just as she awoke, hoping to prove to herself that she wasn’t just dreaming what she’d seen on the news the night before.

"She was trying to convince herself she was not going crazy, which is all our public culture can do with these things," said Jeffrey Kripal, a scholar of religion and professor of philosophy and religious thought at Rice University in Texas.

Krohn and Kripal have co-authored the book on her experience, "Changed in a Flash," out in October.

Kripal studies experiences like Krohn’s — what might otherwise be labeled "paranormal" or "anomalous" — that he says may offer a template for what religion looked like before it became "religion," such as experiences that might have inspired ideas like the existence of a soul, or heaven, or other core concepts of religious belief.

Kripal said to dismiss such experiences as impossible ignores the transformative power of these stories and the beliefs they inspire.

"We live in a culture that suppresses them, in various explicit and implicit ways, so people don’t talk about them," Kripal said. "Elizabeth waited 30 years to come out of her closet to talk about these experiences because she was afraid of what her social peers would think."

"All I can say is it changed me," Krohn said of being struck by lighting. "I believe that death is not the end. Although I can't tell you why or how I believe that. I'm sorry. It happened to me. But I can't explain it."

The larger point for a religious scholar like Kripal is people have been having experiences with the divine, the alien, the weird and unworldly, for as long as people have been on this planet. And while few have a satisfactory scientific explanation, they still become stories — stories that people tell over and over, and sometimes even inspire religious belief.

"God and scripture are later developments that come out of these experiences," Kripal said.

If 100 people have near-death experiences, communal stories start to emerge about the soul living beyond death, he said.

"You would develop beliefs in the existence of the soul, prophecy, and divination," Kripal said. "Of course, that’s exactly what you see in the history of religions."

Kripal’s argument is that if we want to understand where religious belief comes from, we have to accept that these experiences — no matter how bizarre or unexplainable they may be — are real for the people who experience them and for the people transformed by the stories behind them.

"There are things that happen all the time that are impossible given our models, but they’re clearly not impossible, since they do happen," Kripal said. "Paranormal phenomena push us to develop new models of the natural world and new models of ourselves."

What does all of this have to do with religion? It reveals the underlying sources, said Kripal, belief systems that give order to a world we do not always fully grasp or understand.

"Religion is trippy," he said. "The only reason we think it’s not trippy is that we’ve grown too accustomed to our own religious worldviews."