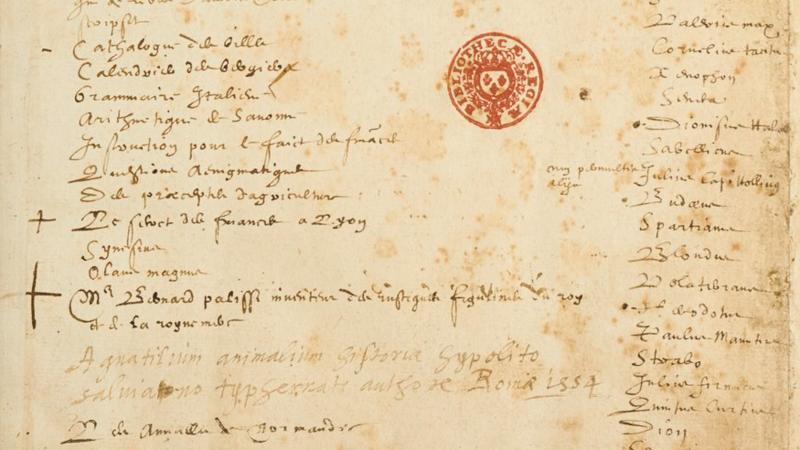 An original page from a manuscript in the "Secrets of Craft and Nature" project, which offers English and French translations of alchemical recipes and texts. Bibliothèque nationale de France (CC0)

Science history students at Columbia University don’t have to imagine what it was like to be an alchemist. If they take one of historian Pamela Smith’s courses, they can spend a semester reading medieval alchemical manuscripts describing recipes for making emeralds or turning silkworms into gold. Then they re-create the experiments in a lab.

"I think that realizing those different understandings and not putting them on a hierarchy from primitive to modern is very important," said Smith told Anne Strainchamps of "To the Best of Our Knowledge."

She argues that because of their different relationship to the world — as we understand it through some of these recipes — we can infer that they might handle the issues of our time, like catastrophic climate change, very differently.

"The world view that saw humans as a part of nature might have led to a different kind of attitude toward nature that would not have landed us in this crisis," she said. "To be aware that different ways of understanding the universe might have value, I think, is important."

Among the translated alchemical recipes, some true panacea do exist. Smith cited a literature professor at the University of Nottingham in the United Kingdom who, in re-creating a cure-all potion for eye infections, discovered a solution that could fight antibiotic-resistant bacteria. But for the most part, her and her students are attempting to create riches mainly to understand the scientific minds of another era.

Here are two recipes Smith and her students tried to replicate, along with their findings.

The transcript highlights below have been edited for clarity and length.

Take ground rock crystal (mainly silica and red lead, which is powdered bright orange). Then take a little copper to add the green. Then add some salts, and heat it all together.

Results: "The grad students and the post-doc who was working with them tried it about 10 times and just got ash," Smith said. "Then they got black glass. Finally, on about the eighth try, they got green. Beautiful green emeralds."

Conclusion: "The interesting thing about these very ancient recipes for imitation gemstones is that they don't refer to them as imitation. The value is in the actual skill that goes into the imitation. (And) it really does take skill."

Acquire silkworm eggs. You can grow silkworms in a vessel of horse dung, Smith said.

"(It) sounds very exotic, but that's a very, very common thing that you see in recipes at this time, because horse dung and cow dung actually are host to thermophilic bacteria," Smith said. "It stays a constant temperature as long as the bacteria stays alive. So actually, it's a very good way to keep something warm at a constant low temperature."

One you have silkworms, feed them mulberry leaves until they are big enough to fight each other to the death. Then feed the victor gold leaf, and heat the vessel, killing the victor. Finally, use the resulting powder to make gold.

Results: "We found a supplier in Long Island or somewhere who could get us silkworm eggs," Smith said. "The student grew the silkworms — he had to keep the silkworms at a constant temperature of about 80 degrees Fahrenheit. We even called up the stables in New York City, but there was no way that we could actually have a pile of manure or composting anywhere on campus. And besides, it was winter and it wouldn't have worked. So what the student did was (find a nice warm spot) at the top of the boiler in his apartment building.

Conclusion: "I don't think it could ever actually work... the importance of this recipe is in its symbolism and in its antiquity," Smith said. "These people have the focus on the same kinds of questions we have, like what generates life, what can regenerate growth, like growth of a limb or growth of an organ. So the focus is the same. But the way they're answering them is often different within a different cosmic understanding."

"People understood nature through religious texts and practices," she continued. "So it's not surprising that something that gave rise to new life or gave rise to the ability to a noble a metal or some other material would be compared to Jesus's resurrection."