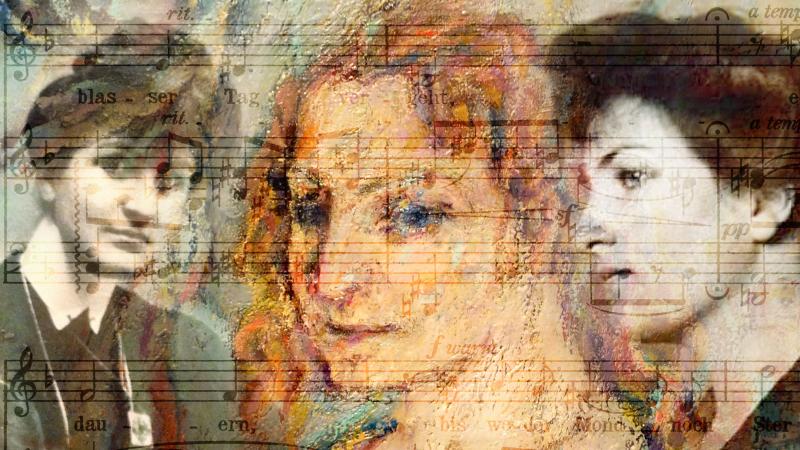 It's a meet-cute out of a turn-of-the-century rom-com: a brilliant, young woman crosses paths with a celebrated composer, he falls madly in love with her, and proposes after a whirlwind courtship lasting only a fortnight.

All the eyes of high society in 20th century Vienna are on them — Gustav Mahler, the composer at the forefront of a Romantic Viennese symphony revival, and Alma Margaretha Maria Schindler, soon to be Alma Mahler.

But according to novelist Mary Sharratt, this was less a tale of a mad love affair between a man and a woman and more a tale of a woman's absolute devotion to creativity and genius.

"If you read her diaries, it's just full of this effervescent passion, this kind of joy of life, of wanting to experience everything life had to offer," said Sharratt, speaking with Anne Strainchamps for "To The Best Of Our Knowledge." "She had so much energy, so much enthusiasm. And if she believed in you, she would do anything for you."

The "anything" in this case turned out to be a big ask.

Even at 22, when she met Gustav, Alma was a prolific composer and musician in her own right — but her fiancé did not approve. He demanded she cease her own creative endeavors to be a better wife to him. In Sharratt’s book, she cites a letter Gustav wrote Alma:

Before we speak again you must renounce everything superficial. All vanity and outward show concerning your individuality and your own work. Would it be possible for you to regard my music as your music from now on. As for your music, I prefer not to discuss that in detail right now. But how can you imagine both husband and wife being composers? Have you any idea how ridiculous and degrading such a rivalry would become. You must become the person I need if we are to be happy together — my wife, and not my colleague.

Alma was crestfallen. Nearly a decade of training in musical composition from famed musical figures like Max Burckhard and Alexander von Zemlinsky. Hundreds of her own compositions to be cast aside.

But despite her high social standing, she had no support in being a creative, independent woman in Vienna — Sharratt said at the time, it was misogynistic even compared to other parts of the world in the same time period.

"Women who did strive for a livelihood in the arts were mocked and ridiculed as the third sex," Sharratt said. "The pseudo-science of the day said if you did this, you would damage your uterus and you wouldn't be able to have babies."

To reach for a creative life of her own, Alma would not only need to argue with her suitor — she'd have to argue with Freudian analysis that her desire made her "hysterical."

Setting aside her own music cemented the historical narrative that has remembered her as a muse, a supporter and lover to brilliant, creative men — first Gustav, then after his death architect Walter Gropius, and eventually playwright and novelist Franz Werfel.

But Sharratt said that Alma was so much more than the muse or "femme fatale" that she's remembered as in history books and cheesy movie adaptations of her life.

Alma actively wrestled with this from the early days of her courtship with Gustav. In Sharratt’s book, she cites a diary entry from Alma:

I have two souls. I know it. Am I a liar? When he looks at me so happily...what a profound feeling of ecstasy. Is that a lie too? No, no I must cast out my other soul. The one which has so far ruled must be banished. I must strive to become a real person.

While eventually some of her music was performed and published — her second husband, Gropius, was more supportive of her musical abilities — only 17 songs are remembered of the hundreds she wrote in her lifetime.

While her story might seem sad to us today, Sharratt said Alma's rebelliousness in the face of a male-centric social order is why she's remembered at all, and why her story — and her music — is worth diving into more deeply today.

"You can think of Laurel Thatcher Ulrich's famous observation that, 'well-behaved women seldom make history;' that could have been written about Alma," Sharratt said. "If she had been a good little hausfrau who behaved herself, we wouldn't be having this conversation."