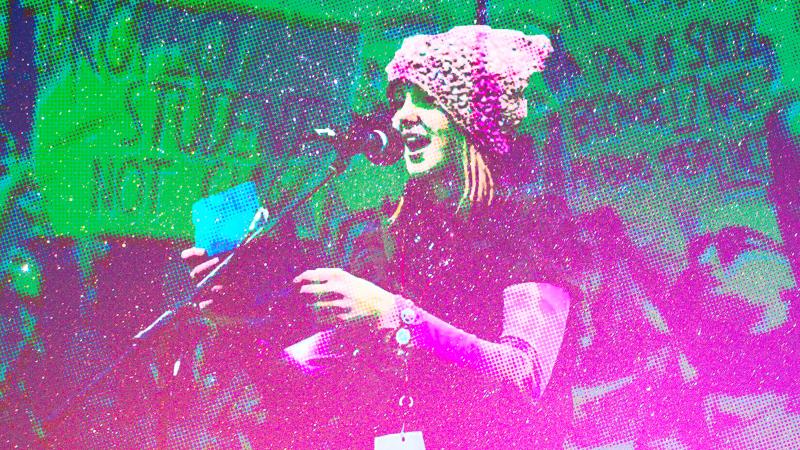 Lydia Hester is counting the days.

Not until she can drive, or head off to college, like a teen out of central casting.

She's not chasing after her first job, either. She already had one — as the campaign director for her local city councilman, Tag Evers.

Hester, a 17-year-old living in Madison, Wisconsin, is counting down the days until she can vote. Her obsession is convincing other people to do it, and she wants a crack at the ballot box herself.

"When people say they aren't going to vote, or 'My vote doesn't matter, it's just one vote,' I wish more than anything I could use that privilege that you have," Hester told Anne Strainchamps on "To The Best Of Our Knowledge." "I'm like, 'Can I have your vote?'"

When it comes to civic engagement, Hester already has a long track record. At 8, she was marching to protest former Wisconsin Gov. Scott Walker’s limitations on public employee unions. By 2016, she was well-practiced in organizing rallies, school walkouts, marches and advocacy days at the state Capitol. More recently, she penned an op-ed for the local paper about why she and her fellow students felt compelled to act now.

"As Wisconsin students, we are taking action against gun violence because policymakers have failed to do so," she wrote for The Capital Times. "They have failed to keep us safe in our schools by refusing to pass needed policies to prevent dangerous people from getting guns."

She's one of the many teenagers all over the world arguing that adults need a strong kick in the right direction. It was only weeks after the tragic mass shooting at their high school that Marjory Stoneman Douglas students like David Hogg, Cameron Kasky and Emma González became international figures advocating for stronger gun control. Sixteen-year-old climate activist Greta Thunberg told a crowd of wealthy attendees of the World Economic Forum in Davos, Switzerland that "our house is burning," and in response to adults who talk about giving their children hope, she said, "I don't want your hope. I want you to panic."

"I think young people have been able to navigate that really well, understanding how to bring it to people," said Hester. "You just have to bring it to their level. Our generation has really been able to see that politics isn't what a lot of people think of when they hear 'politics.'"

Activism is just one part of teenage life for Hester — she talks about running for office and choosing a college as tandem events in her life. Advanced Placement courses aren't just giving her piles of homework — they're fodder for taking on the argument that action on climate change can seem impossible: the free rider problem.

"If people fish in a lake, it's like, 'Oh, it's just a few fish, it doesn't matter.' But if everyone thinks that way, then there's going to be no more fish left," said Hester. "If everyone can just take a small step for themselves, that will make a huge impact. A lot of people don't see it. Even if they see the urgency, they don't really see it."

Teens have always been stubborn and full of ideas, said Hester, but the media landscape has changed to the point that their ideas can break through and catch fire in a way never possible for previous generations. "In the past, it was a lot harder to build a movement. But now anyone can put something on the internet, and it can just explode and everyone will see it."

"Social media has both been a curse but also very helpful in getting people involved," said Hester.

In some ways, Hester has tapped into the sense of infinite possibility that all of us have in those formative years — she's just channeled hers into the very real and pressing politics of the moment. But that energy is finite, even if it doesn't feel like it to her.

"I just sort of take on a lot of things, (but) I don't really take a step back to see if I will actually be able to handle all these things at once. But I know a lot of people who are doing that right now," said Hester. "'Oh, I can be on the board for this organization.' 'Oh, I can lead this club'... but then you realize that 12 hours of every day, it's completely booked up. Which is really hard for a young person to handle."

Still, extreme weather? Wildfires? Mass shootings? The pressure to do more is strong.

Hester has found that getting politically active so early in her life has created some tough personal choices. Can she really go off to college in the midst of the 2020 presidential race?

"It feels almost like I'm being selfish if I just do what a normal teenager would do," said Hester. "What if a seat for (state) Senate, (state) Assembly, U.S. Senate or Congress or something opens up and I want to run for it? But I can't do that if I'm in college."

Her parents are cautiously supportive — they're not in the "skip college, run for office" camp. "They want me to focus on myself and what I need to do to be successful in the long term, you know."

It’s inspiring to watch these young people trying to change the world, but it's not really fair to expect them to do all the heavy lifting. Hester agrees — she says that "it's everyone's job to create a movement and to save our future." But Hester's ask for help is pretty modest — just go vote.

"Vote for the people who can't vote, and when you're voting, don't just think about yourself when you're in that voting booth. Think about all of the younger generations that can't vote or who's future this will be affecting. "