Taking Wasted Time Online And Turning It Into A Creative Outlet 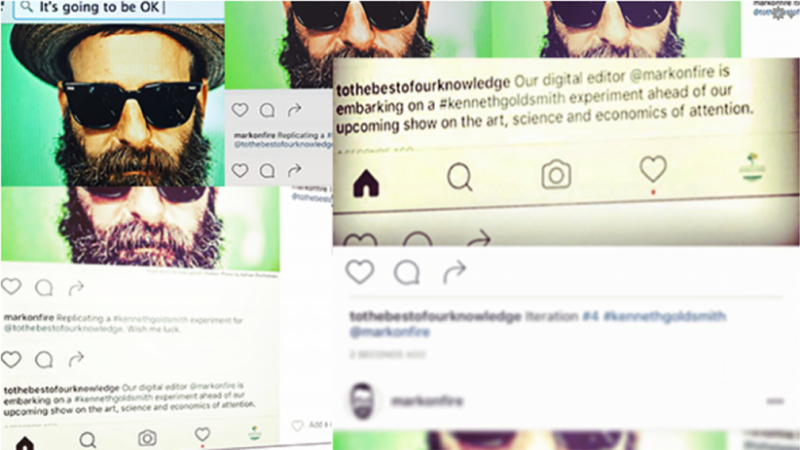 We often think about time spent on the internet in terms of wasted minutes (or more honestly for some, hours) that should be put to a more productive use – answering emails or finishing up that proposal. But what about the weird videos we share? The perfect GIF we use in lieu of a complex emotional response to a conversation between friends? The deep dive into competitive video games over drinks with a colleague?

We don't always consider the small changes in our influences, thinking and communication that occur directly as a result of those wasted seconds bouncing between emails, Facebook posts and Reddit threads, but conceptual artist and professor Kenneth Goldsmith argues there's opportunity in those precious clicks and darts from page to page.

If we challenge ourselves and those around us to push the boundaries of what we think we know and see online, "wasting time" becomes exploring the Web as a space of possibility, a process, he claims, is inherently social and creatively generative.

Goldsmith makes the case for wasting time on the internet with his appropriately titled book, "Wasting Time on the Internet," developed out of a course he taught at the University of Pennsylvania.

"We just sat around a round table and wasted time together on the internet for three hours a week. The class became an incubator, an idea generator, for ways that people together could waste time on internet," explained Goldsmith. That togetherness was the key differentiator for him, using the class to advance an argument that, should we do it together, the experience of wasting time is actually highly creative.

"Normally, when we waste time on the internet, we waste time alone. It feels alienating," Goldsmith said. "But when you put people together, mediated by machines, we found that those machines amplified emotion, amplified affect, actually made us more physical. More aware of our bodies in the space together."

If you're wondering what this looks like, imagine an entire room of college students shouting directions at one person manning the computer mouse. They click, then a chorus of voices screams to click an image in the corner, leading elsewhere.

"I think I'd like to say that the class became like 'meatspace social media.' In other words, social media is predicated upon the ways that we interact in real life, as much of the Web is. This class just sort of reified those notions, that technology can draw us closer together, rather than the typical notion that it is separating us somehow," said Goldsmith. A class session plays out as a clickbait hunt with escalating urgency.

But the mania is driven by thoughtful, critical thinking, particularly driven by surrealist thinking about surreal shattered spaces.

"If we begin to look at the fractured spaces of cubism, the accelerationism of futurism, the dream spaces of surrealism, the commodification of pop art – we begin to see the 21st century in those 20th century experiments," Goldsmith said.

The author compared the experience of the internet to Andre Breton's notion of dreamscapes within waking life, with software serving as the normal space that digital dreams can manifest within.

"The web gives us a glimpse into those temporary autonomous zones, those places that are free from necessity, very much the same way that art works," he continued.

The output of the course was a sort of handbook of how to push the boundaries of these "temporary autonomous zones," 101 ways to break parts of the internet in creative, socially engaging ways. The book lists them in a handy appendix, and they range from "#2) continually posting and re-posting ever-degrading screenshots of an ill-gotten photo to Instagram" to "#26) Find your greatest fear on the internet and sending it to a friend" to "#30) Interviewing a person for Vine without telling them the interview will only last six seconds."

Part of the idea Goldsmith advances with his students in this work is the internet is fundamentally different from media formats that came before. It exists in shattered spaces across 16 different open windows: on your desktop, in conversation between friends and in silence as teens converse silently with one another through screens. This leads to misunderstandings about how it might be shaping, or misshaping, the youth that take to it readily, similarly to the indignance radio listeners shared over the consumption of television by voracious early viewers.

"When I was a kid, things were being fed to me. I think that the Web is not monolithic the way that television mostly was, with seven channels," explained Goldsmith. "The notion of choice on the Web makes it fractured and more interesting. It's a diverse experience that I think we need to learn to embrace and understand and cherish."

Goldsmith encourages people to embrace the unique aspects of living, conversing and consuming culture online. By "wasting time" in that space, we can study the boundaries of it, and better understand how it might enrich our daily lives.

"One of the problems that I have is that many people want to return to a time of unification, of unified attention spans. Go back to reading long novels," Goldsmith said. "The fact is that we read long novels, but we read them on our devices. I'm reading several long novels from the 19th century on my iPhone. It's OK. We do both."

In this sense, the internet encapsulates so much it would be absurd to take it all in or to only spend time in the corners of it directly related to our everyday lives. In the internet-breaking experiments Goldsmith and his students highlight that absurdity and where it can pop up in our daily online routine. In that spirit, let's pursue item No. 48 and make this video viral by all means necessary.