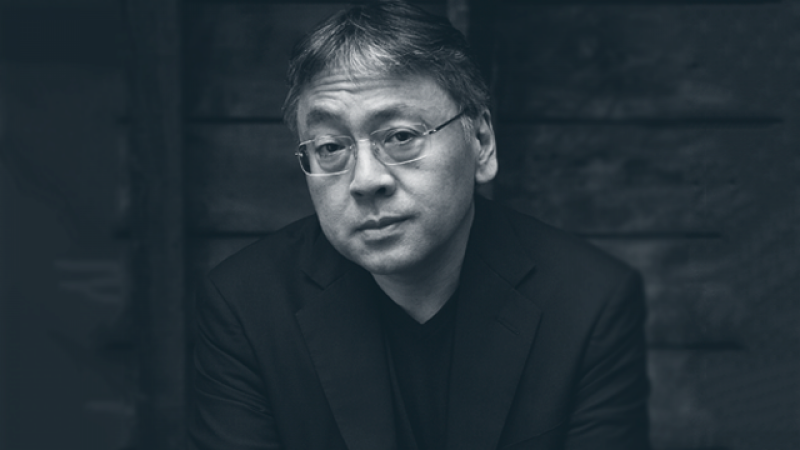 British novelist Kazuo Ishiguro was awarded the 2017 Nobel Prize in Literature, which recognized an author "who, in novels of great emotional force, has uncovered the abyss beneath our illusory sense of connection with the world." Those novels include, most recently, "The Buried Giant," as well as the widely-praised "Never Let Me Go." Steve Paulson spoke to Ishiguro about each novel - in 2015 and 2011, respectively. In both conversations, Ishiguro reveals why he chose different genres to tell stories about the absurdity and fragility of the human experience.

On the importance of innocence

A boarding school is a physical embodiment of what happens to most people, I think. Childhood is really like a bubble. I was very conscious with my daughter of what extent I kept her in a bubble, a protective bubble, and ran around rather neurotically trying to censor news of the darker side of the world that actually awaited her. It's amazing how much adults wish the children to be deceived into thinking the world is a kinder place than it actually is. I think that's probably right — at a certain age, children have to be kept in a bubble and deceived — and as adults, as guardians, it's our duty to drip feed certain bits of information into that bubble.

To put it crudely, it's almost a literal way of asking whether human beings are more than the sum of their parts. Because these people are clones, it sharpens that question. What does it mean to be human? I would hope that when a reader is reading this book, they're watching strange people in a strange situation. But somewhere along the way, I want the barrier to break down, so the readers think "oh, we're reading about us." These are exactly the big questions that we face. We all know that we're going to die. I'm not really focusing on the death aspect of it—I'm focusing on what we do while we're here.

The knowledge of our mortality isn't something I'm suggesting we dwell on in a morbid way. But it forms a kind of backdrop all the time to what we do and how we go about things. We are very aware of a countdown going on. Even if we don't talk about it much, we're always very aware of our age, the timing of things, what is appropriate for our age. When we think about friendships or love, we're always thinking in terms of "Well, how old is the other person in relation to me?" or "What should I have done by this age?" This novel, by creating an artificial, sci-fi situation where we're watching a group of people whose mortality is ridiculously exaggerated, I'm hoping we can get a fresh take.

I don't believe in a god, but if you did believe, you might ask these things to God. What's the point in asking us to treat each other decently, to ask each other big questions and to create art? Why did you create love if it's all going to end like that anyway?

The crucial thing that interested me was that some piece of societal memory had been re-awakened to mobilize the hatred and the violence. What drew me to such a setting? This is on the surface an ancient, semi-mythological kind of setting, but what triggered it for me were a number of things that happened in the 1990s. Particularly on our doorstep: Yugoslavia disintegrated in the early 1990s. And it was amazing to see — in this place where we used to go on vacation — concentration camps and a massacre.

We had people who were using each other as babysitters, living in the same neighborhoods, the same villages. One group suddenly "remembered" reasons to hate the other group. In the case of Bosnia, powerful people had very deliberately re-awakened memories from the Second World War.

But on the other hand, there was one positive example of a country who got that balance between how much a nation should remember, how much a nation should forget. They got it just about right, I feel – South Africa, as it came out of the Apartheid regime. For a time, it seemed inevitable that the country would descend into civil war. But it didn't, partly due to remarkable leadership. The Truth and Reconciliation Commission was a very deliberate process by which that nation went about balancing that very difficult question: how much should you remember of the terrible things that have occurred?

On the value of forgetting in order to move forward

I would say there are definitely moments in a community's life where it's better to forget things, to avoid just falling apart. To avoid cycles of violence, as we had in Britain, in Northern Ireland. People are deliberately keeping alive memories from centuries back to fuel the hatred.

That's the case with relationships in "The Buried Giant.” In something like a long marriage, which is at the center of my book, you have exactly the same kinds of questions. There are inevitably dark passages that the two people in the marriage wish to just move on from–it may not be as simple as infidelity. It may be some bad thing that just happened, that wasn't anybody's fault. But sometimes you just have to move on. This is the question that Axl and Beatrice face. On the one hand, would our love survive some of those buried memories coming alive again? But on the other hand, if we don't look at those buried things, is our love phony? Is it based on something false? Is it really a true love if it's based on forgetting some things?

I'm never very concerned about what official label you put on things. If you're saying books like "Beowulf" or "The Odyssey" are fantasy, then definitely this book is fantasy...there's been a kind of snobbery on the part of the mainstream literary community towards the fantasy genre. And to some extent, I'm experiencing that for the first time since I published this book. I have had people say to me, "I love 'The Remains Of The Day,' I love 'Never Let Me Go,' but I hear your new book has ogres and pixies in it. I'm not sure if I want to read it." This slightly shocked me because when I was writing the book, I needed my pixies and my ogres for very strong artistic reasons.

My story required a community that was suffering from some sort of strange amnesia. What appealed to me was to have a very old-fashioned, traditional fantasy reason: there was a mist that had come over the land, and people were losing their memories. How I work is to take anything available that would make my story work. But if lines are being drawn about whether pixies and ogres are good things for literature, I'm on the side of the pixies and ogres.