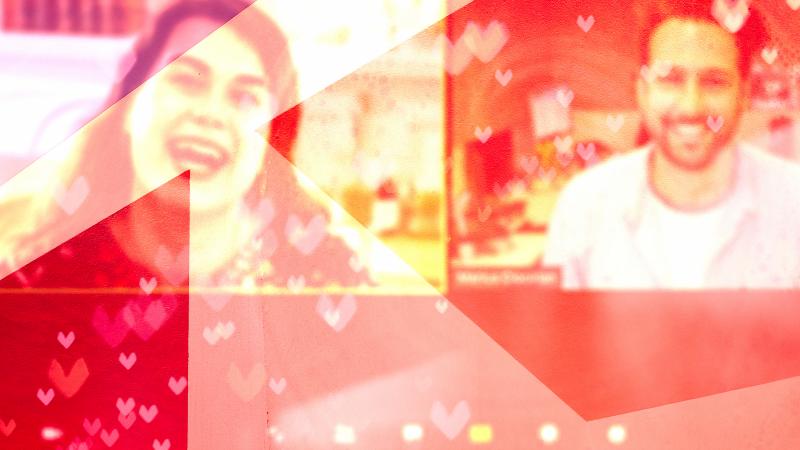 Living in this COVID-19 quarantine is hard on just about everyone, but it’s especially tough for those looking for love, or at least a good date. But it’s not as hopeless as it might seem, according to dating coach Logan Ury. For some people, there’s a silver lining to this enforced isolation — maybe even the jolt they need to break out of bad dating habits.

Ury is a Harvard-trained behavioral scientist who leads the research team at the dating app Hinge. She’s just written a book about common dating mistakes called "How To Not Die Alone: The Surprising Science That Will Help You Find Love." She says most people with a lousy dating history repeat the same mistakes over and over. In a conversation with "To The Best Of Our Knowledge," Ury told Steve Paulson that the underlying problem is unrealistic expectations.

Steve Paulson: I think a lot of people assume that the COVID-19 lockdown has pretty much destroyed the dating scene these days, but that's not exactly true, is it?

Logan Ury: No, it's not. I had the same question. I was really wondering, how are people going to respond to the pandemic? Are people going to take 2020 off from dating? We were really interested to see the creativity and resilience of people.

So there's been a couple of interesting things that have emerged, but the biggest one is the rise of video dating. That's sort of the new coffee date. It's the chance to have this low-pressure vibe check and say, "Is this the kind of person I want to see again?"

SP: Well, I was going to ask whether there's actually an upside to dating on video. Maybe it encourages deeper conversations and a different kind of intimacy?

LU: One thing I hear is that people say, "You know, we hopped on a video chat. It wasn't great, and I was happy that I saved the $21 on the cocktails and didn't put on too much eyeliner."

Another really cool thing we've seen is the rise of intentional dating. So that's people who started out the pandemic alone, sheltering in place by themselves, who said, "I don't want to be by myself and I want to change my priorities." They decided to get more honest with themselves about who they are and the type of people they go after.

SP: Your job title at the dating app Hinge is "director of relationship science," which sounds pretty highfalutin. What does that mean?

LU: I totally agree with you. Originally, there was a perception that love is this organic, natural thing, and it can't be studied. But now the direction is relationships are the cornerstones of our lives. Our health, happiness and overall life satisfaction hinge on them, and so this whole field has emerged that studies attraction, connection, what makes relationships last. So we help educate our users so they can learn from the people who have found success.

SP: What do you think are the most common mistakes when people date?

LU: People keep repeating the same patterns over and over again and they're leading to bad results. They're stuck in this pattern of going after the wrong people or showing up in the wrong way, or sticking around too long or too short.

So the first step is really self-knowledge, this audit of your dating life: "OK, so I've been doing X and I'm getting Y. What should I do instead?"

There was this woman I worked with named Maya who thought that love is something where you shouldn't put effort in or else it's not romantic. And one day, she would be at the farmer's market and she’d reach for the perfect tomato and the guy would reach for it, too, and they would have this soulmate connection and everything would be easy after that. Maya is the type I call the "romanticizer," and these are people who have unrealistic expectations of relationships. They expect it to be effortless and for love to find them.

The "maximizer" is definitely the kind of person I see the most in my dating coaching practice. So this is a real quote from a client: "I like my girlfriend and she has all these good qualities, but could I be 5 percent happier with somebody else?" I mean, it sounds ridiculous, but these are really the things that people say to me. So this type of person loves research. They're always going to Wirecutter and saying, "What's the best wireless keyboard and what's the best spoon?" They have this idea that there is a total set number of people who they might date and they need to turn over every stone, and only at that point can they commit to someone.

They're terrified of settling. And they don't realize that they've probably already dated somebody who could be a great partner. What matters way more is how you feel about your choice, not making the supposedly perfect choice.

The last (type), the "hesitater," has unrealistic expectations of themselves. These are the people who say, "I'll date when I lose 10 pounds. I'll date when I have a more impressive job. I’ll date when I have my life together." They have this story in their head that one day they'll wake up and be perfect and then they'll be ready to date. They're underestimating the cost of not learning what type of person they're interested in and, most of all, not getting better at dating.

SP: You say dating has actually gotten harder with all of the online dating sites, which sounds counterintuitive. You'd think it would be much easier to meet people now.

LU: For the average person, there's just so much choice and it's really overwhelming. I have people in their 20s and 30s who come to me and say, "I just wish that I was in an arranged marriage," or "I just wish someone else would make the choice for me. I don't even think that I'm qualified to make this choice."

There's also this really interesting theory from Eli Finkel, who's one of the leading thinkers in the field of relationship science. He's at Northwestern and he has this book called "The All-or-Nothing Marriage." The idea is that the history of marriage actually mimics (Abraham) Maslow's "hierarchy of needs." So we used to marry for security and our basic needs. Then over time with industrialization, we started marrying for love and then we were marrying for belonging. Now we are actually at the pinnacle of Maslow's hierarchy and we are marrying for self-actualization.

SP: So this means that you want to find a partner who helps you self-actualize — basically, who encourages you to flourish yourself?

LU: Yes. The best marriages of today — the marriages that achieve that — are probably better than any marriages in history. But many people are also divorcing for reasons that our grandparents could never imagine. You just can't imagine somebody 80 or 100 years ago saying something like, "You didn't help me become my best self and therefore, I'm ending this relationship."

Obviously, there are a lot of reasons, including no-fault divorces, but what we expect to get from marriage and who we expect our partners to help us become is really different.