Never Write In The Language of the Colonizer 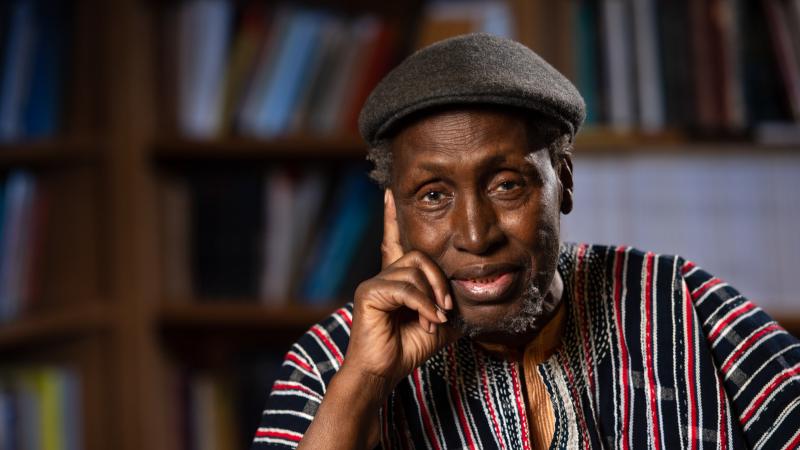 Sometimes, the simple act of speaking in your mother tongue can be a revolutionary gesture.

That was the case for the Kenyan writer Ngugi wa Thiong'o, who wrote and staged a play in 1977 that slammed the ruling elites. What landed him in prison, though, wasn’t his political message of worker empowerment. It was the fact that local actors performed in their native language instead of English.

At the time, Ngugi was a prominent writer and popular professor of literature at the University of Nairobi. He soon came to be seen by the repressive Kenyan government as one of his country’s most dangerous people. On New Year’s Eve in 1977, Ngugi was arrested and locked up in a maximum security prison. Then, in a remarkable act of defiance, he wrote a novel in his native Gikuyu language — the first modern novel written in Gikuyu — on prison-issued toilet paper. This became one of the defining events in modern African literature.

And that novel he wrote in prison? It’s a modern classic — later published in English as "Devil on the Cross."

Today, Ngugi is one of Africa’s great men of letters and a perennial candidate for the Nobel Prize in Literature. He’s the author of such groundbreaking novels as "Petals of Blood," "Wizard of the Crow," and most recently, "The Perfect Nine," which tells the creation story of the Gikuyu people.

But he might be most famous for arguing that African writers should write in their native languages, not the colonial languages of English or French. Speaking to Steve Paulson for "To The Best Of Our Knowledge," he says the best way to "decolonize the African mind" is to reclaim African languages.

Steve Paulson: Why was writing in your native language of Gikuyu so threatening to the Kenyan government?

SP: We should point out, though, this is in the postcolonial era. The British had long been kicked out of power and Kenyans were running the country. Why did they need English to hold onto power?

SP: What was hardest for you about that year of being a political prisoner?

NwT: You know, I was a professor of literature. I’m a writer. I'm used to having books around me all the time. Then you’re put in a maximum security prison. You have no books, no radio, no newspapers, no pen. Nothing.

So how am I to survive in prison? It’s when I decided I’m going to write a novel in prison. And I'm going to write it in Gikuyu, the language which was the basis of my incarceration. And there had never been a modern novel in the Gikuyu language.

SP: I don't understand how you could actually write a novel when you were under surveillance.

NwT: Well, it's actually quite simple — they wanted me to confess sins I had committed against the government. So if you say you want to confess, they can give you some paper. Not a lot, but one or two sheets. But the key thing is they also give you a pen, which I really needed. Not paper, because where would I get paper from? Toilet paper.

The toilet paper they gave us was not the usual soft kind — the ones we see on television these days. It was a bit hard. I always joke that maybe it was meant to punish us prisoners. But believe it or not, it's a very good writing paper. It held the pen very, very well.

I would put back the band of toilet paper and cover it in such a way that nothing was written on the top ones. So from the side, you cannot tell whether there is anything in between. You'd think it was an unused band of toilet paper. Except that one day, they actually came into my cell and saw this bundle of toilet paper almost reaching the roof. And they seized all the written material.

SP: How did you get it back?

NwT: There was a new commissioner of police, and when he looked at it, he didn’t see anything wrong with what I had written. Maybe he couldn’t read Gikuyu. So he just returned the paper to me.

SP: You were released from prison shortly after that and over the next decade, you kept looking into these questions about language and power under colonial rule. Then in 1986, you came out with your book "Decolonizing the Mind."

Nwt: I looked at the centrality of language in all colonial enterprises. In Africa, Australia, America, New Zealand and Ireland, the languages of the colonized were demonized. Children were punished.

SP: Obviously, a great deal has changed since you were imprisoned. For one thing, we've seen a number of high-profile novels written by younger African women, especially over the last decade, and most of them are in English. Do you see that as a problem? Does "decolonizing the mind" mean something different now?

NwT: No, no. It's still a problem. You are right, what is coming out of Africa by young men and women is phenomenal. These are incredible novels. The problem is, just like in our generation, they are writing in English or French.

SP: Do you wish that some of these younger writers were writing in their native language rather than in English?

NwT: There is a problem. There are hardly any publishers for African writing. If I am a person who is beginning to write and just wants to get published, it's easier for me to get an English language publisher. So all government policies and publishing practices are against African languages.

NwT: I'm glad you raised that question because people think I'm somehow against the English language and I keep reminding people that I am professor of English at the University of California, Irvine! (Laughs)

I'm not against English, but I'm against the hierarchy of languages.

SP: To come back to that phrase "decolonizing the mind," do you think it’s still mainly about language? Or is it about other things, too?

NwT: It's connected (to everything). Take the question of a job today in Kenya or in Africa. If you know the English language, you've got an advantage — whether you can become a professor or not. It's the language spoken in Parliament. So for me, the struggle for languages is the struggle for the recovery of the soul of Africa.

SP: One final question. You have now lived in the United States for many years. Do you ever think about moving back to Kenya?

But I don't give up on Kenya or Africa. Honestly, once I retire, I want to go back.