Indigenous excellence: Hip hop and the legacy of Jim Thorpe 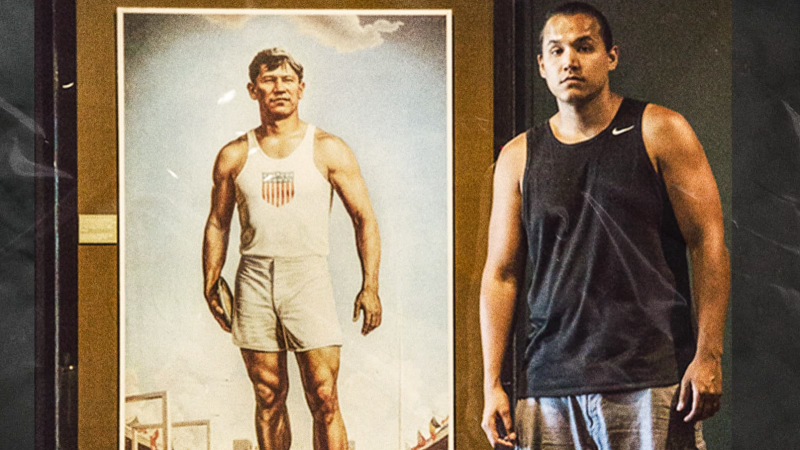 From the album cover of Tall Paul's latest album, "The Story of Jim Thorpe." (via the artist)

Tall Paul is an Anishinaabe and Oneida rapper enrolled on the Leech Lake reservation in Minnesota. His new album is called "The Story of Jim Thorpe." To The Best of Our Knowledge’s Charles Monroe-Kane spoke with him about Thorpe’s legacy, sports and — of course — hip hop.

Monroe-Kane wanted to know why Jim Thorpe was important to him.

"He's important to me as a Native man and as a Native youth when I was growing up, just because of that representation. As a kid, I didn't see Native men or Native women on the big screen too often, especially not in an athletic sense," Paul said.

These interview highlights have been edited from the audio version for clarity and length.

Tall Paul: I was watching the NFL, the NBA — never saw any Native superstar athletes. So, I got curious and started doing some research and found out about Jim Thorpe in my school library. And that inspired me, hearing about him being an Olympic athlete and everything. Even though he had been gone at this point for a long time, I needed somebody to look up to who was Native. That was important for me as a kid.

Charles Monroe-Kane: Do you remember that first time in the library when you saw that famous picture of Jim Thorpe in the Olympics?

TP: Yes. I was living in a small town at the time called Rebel Falls with my family. I was down in the library in school, doing some research and doing some digging, and I found this book on Jim Thorpe. I don't remember exactly which book it was, but I started doing some reading and I'm like, OK, he's an Olympic gold medalist, NFL Hall of Famer, and played Major League Baseball. I had never heard of him before, and nobody ever told me about him. I just kind of had to figure out about him myself. And it was powerful to find out that there was somebody out there like that who represented us.

CMK: I'm curious about you, though, before we kind of go further with Jim Thorpe. What is your story like? What's Tall Paul’s story? How did you end up being an MC making an album about Jim Thorpe?

TP: I was born and raised in South Minneapolis. Growing up, I didn't really know my dad too much — (I would) see some pictures of me sucking on his toes and things when I was like 1 or 2 years old, you know? I mean, but that was the extent of my knowledge of him. Like I didn't really know of his existence beyond these funny pictures I saw.

I met him a little bit later in life, about 9 years old — wasn't the greatest experience. I do know him now and we have a good relationship, but I just kind of preface him with that history and then growing up bouncing all over the place as a youth with my mom and my brothers and sister, and through foster homes, through women's shelters, because my mom had been in some abusive relationships — that was kind of my background.

I kind of grew up in a negative situation, but I always made the most of it with my friends. We would get out and play big games of football. I fell in love with football, which is how I found out about Jim Thorpe.

And then as I got older, about 14 years old, I started rapping. You know, I started freestyling for my friends, started writing little raps because I was watching MTV music videos, Freestyle Fridays on B.E.T. I started getting some exposure to hip-hop and rap, and had some struggles with alcohol.

Fast forward — I was doing all that for like five, six, seven years and then I got sober. I needed something to pick up and use my time with. So, I was like, "All right, well, I'm going to try this rap thing out because it's something that I've always been passionate about." It's been something I consider myself to be good at.

I started rapping and I got some beats from local producers, got some studio time, and got into the whole hip-hop thing. And as I progressed throughout it, I wanted to connect back to Jim Thorpe. I needed to make an album about him.

I just think it's important to push his legacy and also to connect his legacy to something like hip-hop, which is so universally appreciated around the world. More than a music genre — the whole culture. And just if I can attach him to something like that, I feel like it'll do a lot to make people know about him.

Excerpt from "Keep in Keeping On"

Adolescent on the road

To the Texas panhandle,

Taming horses was the goal,

I never met a wild one

I couldn’t saddle and ride,

That’s one achievement from my

To top it off he returned to pops

With a team of em,

A lot of crops were homegrown to chop

He’s the cream of em,

And became a star player

Amidst the illness he’d kill it,

He was passing his classes

While feeling all of these feelings,

On top of that he was fearless

The neighbors bull was just reeling

So all his friends was just peeling

But he took aim and he pierced it,

With a bow and arrow,

To the neighbor to be fair though,

Still demanded he be careful,

Bad to the bone and the marrow

A Bright Path can only last

When you dig deep inside,

Push through the pain and hurt

That can eat you alive,

Don’t lose your stride or grip,

Your fighting for the will

To keep on, keeping on

And on and on

CMK: Are you angry? Is this album angry?

TP: As I was writing this album, there were definitely moments of anger. Just thinking about a lot of stuff that Jim Thorpe had to go through, thinking about the boarding school history and how they started. And, you know, we had to get our hair chopped off and we had to speak, look, dress, walk, talk like "civilized white people," basically.

There was some anger there. And that's been the case throughout my whole life, learning about Native history, not just this album.

In the kitchen and I’m

Chefing this, Rest in pee,

Rest In Peace to ancestors

that came before if you’re

not aiming for the top

What you aiming for? waging war

since Columbus Came on shore

arrowhead To your head

nowadays we Just aim the four,

What you waiting for?

I blaze em all I’m past hot,

walk past but don’t look,

I can tell by the vibes

I got em all shook,

They wrote books but

left the truth out it’s all lies

the coupe out it’s all eyes,

and I, been fly

As eagle feathers none better

When we touch down,

Too late to run now,

No hesitation the style

of play is one cut,

In the name of Oorang,

They played the game and had

Still find em with the people

Lower than the fruit hang

TP: You know, Charles, Jim Thorpe means to me the phrase we call "Indigenous excellence." Embodied in the human spirit, in all our flaws, but still being legendary and great. Not allowing all the things that go against us in life to tear us down and stop us from being our greatest version of ourselves. That's what Jim Thorpe represents to me.

All I hear about is Chiefs but they're all long deceased

man I wish could've seen you play ball on TV,

I wish that you'd receive the same notoriety

the mass media has given all these other athletes,

I just needed someone great who looked like me,

Jim Thorpe you could be my Muhammad Ali,

No submitting both spittin up in college like G's,

My focus not there we probably both got B's

You're the star RB, I'd skip to smoke trees

When I finally got sober I became an MC,

Messing up on stage cause I care what people think,

I needed your influence I don't care what people think

see for me to feel great man I needed that drink,

graduated school and flushed the liq down the sink

now I gotta be you for kids who wanna be me

CMK: Well, damn. And I mean, that's what your album is about. That (kind of means) that you're the legacy of Jim Thorpe, right?

TP: Yeah. I think that is how it works — the so-called passing of the torch. So are all of the other people out there in their Native community who are doing big things. We are the legacies of our ancestors and elders who do great things before us, for sure.

How could a phony

replicate it our roots in the mud,

Tried to copy my ancestors,

By siccing their ham fetchers,

We make our food grow on it,

We picked us up by the bootstraps

They made the loopholes common,

So throw that lazy Indian

Connoting out the door,

Up a fellow native’s soul,

My brother got the Oorang

Indians in his genes

The only Native team

Assembled in the NFL,

Its the Rap Game Jim

Thorpe here with a story to tell,

It’s only right I do it potent

With some Native poets,

The spirit of Bright Path is in me

Yeah he probably wrote this