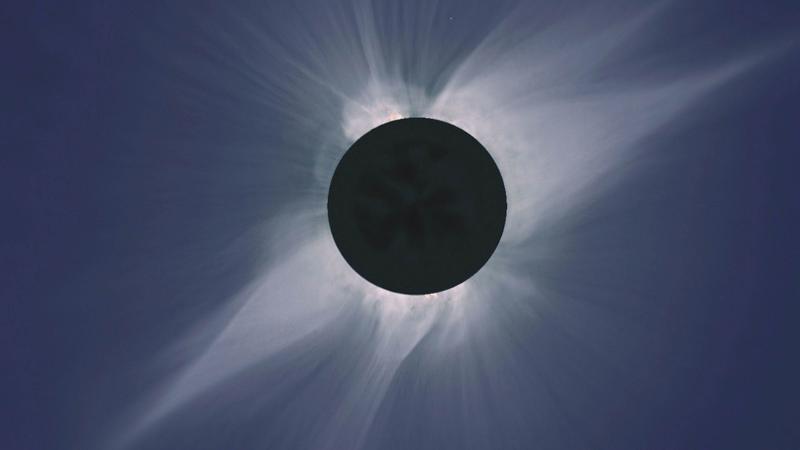 In 1998, at the urging of a scientist he was interviewing, journalist David Baron saw a total solar eclipse for the first time on a beach in Aruba. He describes it as a life-altering moment that left him "permanently fixed in the universe." The experience set him on a path to examine how eclipses have historically inspired wonder and propelled many inquisitive minds forward into careers in science.

Anne Strainchamps talked to Baron about his findings.

Anne Strainchamps: One of the last eclipses total eclipses where the path of totality crossed America was in 1878, 140 years ago. And this particular eclipse was a galvanizing experience for scientists in particular. Why was that?

David Baron: In 1878 we were a young country. We had just turned 100 years old and we were only recently becoming a real industrial power. Europe had to take us seriously, but frankly, they looked down their noses at us when it came to literature, art, music and science.

But there was a small group of American scientists who were determined to turn our country into a global scientific power. And the eclipse of 1878 helped to bring that about: Expeditions were sent out to Wyoming and Colorado and Texas to study the solar eclipse. You had newspaper articles really cheering on the home team of American astronomers and wanting them to succeed and to show Europe what we could do.

AS: It's like the Eclipse Olympics. So who was competing for Team America?

DB: Thomas Edison for one, who in 1878 was just 31 years old but had just become a global celebrity because of his recent invention of the phonograph. That summer, he decided to come out to Wyoming with a group of scientists to actually do some astronomy and he invented a device called the "tasimeter," which was an extremely sensitive heat detector — basically, an infrared detector — that he was going to use to study the strange aura that was seen around the sun during a total eclipse.

Today, we know he was looking at the sun's outer atmosphere, the solar corona. But back then was a great mystery. It was believed that if Edison — the "Wizard of Menlo Park," nicknamed for his lab in New Jersey — was going to be out at the eclipse, he was going to do something marvelous.

DB: Well funny you should say that, because in fact the very day after he returned from his eclipse expedition to Wyoming, he started work on the lightbulb. The eclipse expedition came right between his two most important inventions, the phonograph and the light bulb.

AS: Who else was there?

DB: One that I focus on went west for very different reasons and that was Mariah Mitchell. She was a professor of astronomy at Vassar College, a new all women's college in the 1870s, and she went west to try to convince the American public that women could be scientists. At the time, there were very few female scientists and it was very hard for women to get educated in science, then go on to get a job. So she put together an all-female expedition from Vassar, which got a lot of attention in the press. People were fascinated by these female scientists who on their own headed out to the wild west to study the eclipse.

AS: There have been other times when the goals of American science and democracy kind of aligned in in a similar exhilarating kind of way. I grew up watching moon launches on TV and I remember the thrill of feeling like the whole rest of the country was tuned in at the same time. Today there's something about that that seems almost innocent and idealistic. It just seems like we're in a very different place now in terms of how we think about science.

DB: Perhaps, but I'm really interested to see what's going to happen on August 21st, because I think that the eclipse this year could have a similar effect to the one in 1878, and in some ways the moon landing. In terms of a shared experience that goes beyond partisan politics, science is just about the wonder of the universe. I think we will have that experience on August 21st.

I've been on a book tour for much of the last two months and at a talk I gave in Philadelphia in June, a young man in his 20s came up to me. He was wearing a T-shirt from the European particle accelerator CERN and he said he had to tell me that he as a boy growing up in Venezuela, he saw that same total eclipse that I saw in 1998 — the path of totality went over Venezuela before it got to Aruba. And he said witnessing that total solar eclipse as a boy inspired him to become a physicist.

I tell you we're going to see the same thing again on August 21st of this year. There will be children all across the United States —particularly in the path of totality from Oregon to South Carolina — whose lives will be changed. Some of them will decide that they want to study science because of what will happen to them in less than three minutes on a Monday in August.

Update: a little peek of what it's like in the path of totality.