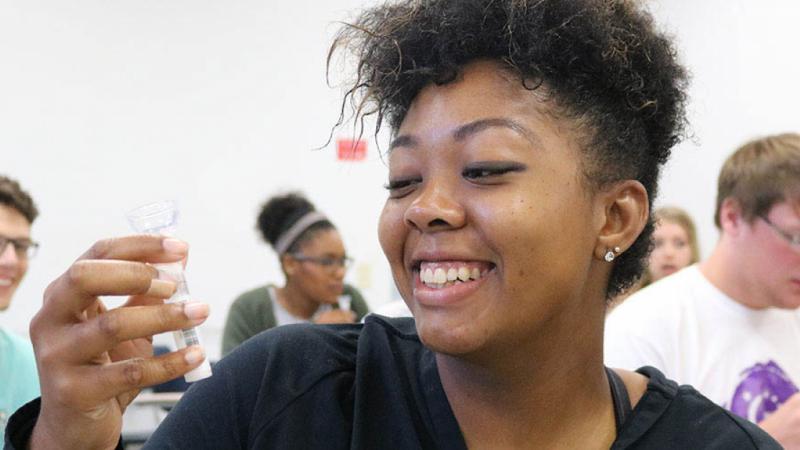 Every semester at West Chester University, a classroom of undergraduates tears into envelopes filled with the secret history encoded in their DNA, uncovered by a genetic test. They eagerly pour over the pie charts breaking down relative percentages of countries of origin, seeking to affirm the family history they already tell about themselves, or in many cases uncover new ones. But for Anita Foeman, it's really just the jumping off point for a much more important exercise.

"Somebody goes 'yes!' Somebody else goes 'I can't believe this. Where did this come from? What is that?,' says Foeman, a professor of communications studies and director of the DNA Discussion Project, which gives students access to their genetic history and helps them process their feelings about what they’ve discovered. "The results are in. Let the outrage begin," she jokes. Foeman has been running the course for 12 years as part of her larger effort to use genetic tests to reshape the discussion about race. She hopes to shift perceptions of race from something that divides people toward a more fluid understanding that brings people together in ways they might not realize they are connected.

"I started 12 years ago when I read an article that said you could trace somebody's ancestry based on their DNA. And I thought, Boy, I bet that there are a lot of people walking around thinking their backgrounds are one thing and they're different," says Foeman. "And how would that change the conversation that we had about race?"

Highlights from Anne's conversation with Foeman are below — they've been edited for clarity and length.

How do people react to the surprises in their genetic history?

Anita Foeman: Almost invariably there's something there that is unexpected. Somebody says, "The test is not right. Test it over." But they also start to see that they're connected to people they did not think they were connected to. There was a young white guy who had 2 or 3 percent African background, who was sitting next to two African-American gentlemen and they wanted to high five him. And he was sort of reflecting, "Am I high fiving here? Is this appropriate?"

We've been doing statistical analysis and the group that’s most likely to overestimate their background are whites. Whites will generally say they are 100 percent European and often they will be predominantly European, but there are other things in their background. And even if somebody has 2, 3, 4 or 5 percent, they are completely flabbergasted. If your identity is tied into a singular narrative, having somebody push that narrative is going to be upsetting.

I'm African-American. I was surprised how much European was in my background — 25 percent — which floored me. The most stunning experience that I had was that I went to Ghana several years before I took the test, and as part of that trip we went to a place called the "Door of No Return," which is where the slaves went out on ships and just never returned. So when I looked at my profile, I had significant Ghana in my background. And I thought, "Oh my goodness. One of my relatives literally probably went through that door" and I was surprised at my own reaction.

It's hard to articulate — it's sort of a low level anxiety, just this tremendous feeling of sadness. As a person who has a background in slavery, where you were systematically told that you were not fully human, to face that directly by looking at my DNA was very potent for me.

How should we process the ugly side of our genetic history?

AF: You can also say some of my ancestors were rapists. Genetically, I wouldn't be here if anything had been different in any way. I was surprised — and many people are surprised — by how much Scandinavian is in their background. I had British and Scandinavian. Well, a lot of that is the Vikings beating up the British. There is history carried in those genes.

Your genes hold a very complicated story. So when I hear somebody who's African-American make the statement that "we were raped by them," genetically you carry both of those and your genes do not care what the backstory is.

How does this experience reframe the conversation around race?

AF: That's really what this project is about. Not seeing race as something that pits you against me, but something that tells a story. It gives us an opportunity that we had not had before to see ourselves as deeply connected at the most fundamental level.

Everybody's history is complex. You do not survive from the beginning of time without a very complicated story. We grapple over who's oppressed and who's the oppressor. If you dig back into your past, you have both.

The interesting thing is that over time, people start to talk about race differently. You see a younger generation already being more flexible. In our research, we found that older people were more rigid about their backgrounds. “I'm black, I'm white,” whatever. Younger people were much more fluid in terms of how they saw their racial identity. We see these genetic tests as really just another element of allowing people to live with more ambiguity around race.