You Don't Have To Vote Like Me To Love Me 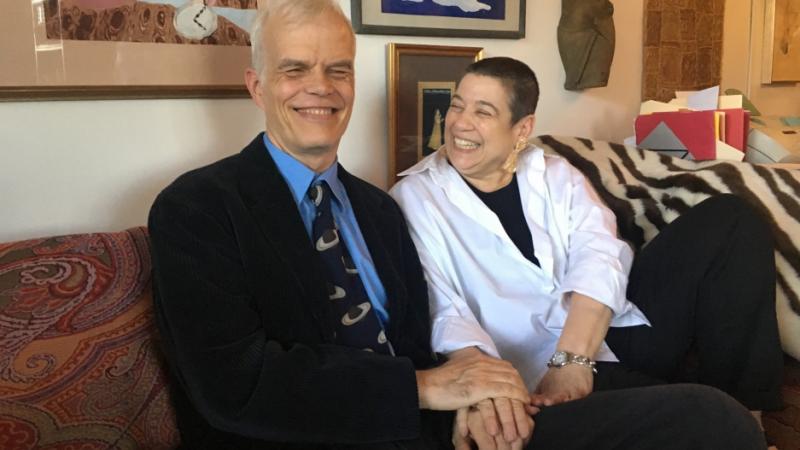 It sounds like a plot ripped straight out of a romantic comedy. Two well-educated, young professional New Yorkers meet in a singing group.

She has a lovely voice and an infectious laugh. He’s tall, handsome and charming. Eyes meet, sparks fly. There’s just one problem: She’s a lifelong liberal, while he’s a dyed-in-the-wool conservative.

Political affiliation can be a deal-breaker for couples today. Dating across party lines is increasingly uncommon. But Jeanne Safer and Richard Brookhiser are still happily married, more than 35 years after that first meeting over music.

Even more remarkable, it’s a marriage of deeply politically-engaged adults. Safer is a psychotherapist in New York City who specializes in “taboo topics” and believes strongly in abortion rights, assisted suicide and gun control. Brookhiser is a senior editor of the conservative National Review who has taken public positions against some of Safer’s most cherished political views.

How does this couple manage to share a breakfast table, let alone a newspaper? “We both feel passionate about these issues,” says Safer, “but we feel more passionate about our relationship and the things we have in common.”

Safer: (When we met), I didn't know anybody who was conservative. The conservatives for me were the John Birch Society. So I got an education and I found, to my distress and comfort, that many of the people whose opinions appalled me, and who were Rick's colleagues, I liked very much. In fact, sometimes they were a lot more gracious to me than my friends who agreed with me were about him.

Brookhiser: I'm a conservative Republican and I went to a liberal school, so I was used to being among people who were mostly not of my views. Plus, my conservative friends had the same view of Jeanne's charms as I had, so it was an easy sell. The one time it was an issue was on a cruise for my magazine, the National Review. Jeanne was seated next to Newt Gingrich, who had just become the Speaker of the House, and they got into a little tiff about George Washington, who was the subject of my first biography. Newt was saying, “Liberals hate Washington.” And Jeanne said, “No, Mr.Gingrich, liberals esteem Washington. I do!” And he repeated, “Liberals hate Washington.” So that didn't work out very well.

Safer: We do avoid some subjects, and I think that's a wise move. At a certain point in any marriage, you realize there are things you are never going to meet on. For us, they just happen to be things like abortion, assisted suicide and gun control. You have to have a sense of humor, but you also have to have a basic notion that you really are not going to change your mate's politics any more than you're going to change many fundamental things about that person. And you shouldn't try.

Brookhiser: One thing that gets you over the bumps is to take a step back and analyze what's happening. Instead of grabbing each other’s throats and going at the issue, you can say, “Your side really played that badly,” or “my side really had an own goal, didn't they?" You can always do that.

Safer: You know, you don't ask the party registration of the person helping you through chemotherapy. And we’ve both had that experience. Politics is important, but in a marriage, goodwill is more important, as well as appreciating the underlying things about the other person. Being a conservative is really part of who Richard is. It's part of his character, his seriousness, his intellect. So it's a package deal for me.

Brookhiser: I have made [Safer] more civic-minded. Because of me, [she votes] in every election, because [she] knows you have to cancel out that vote of mine. So I've made [her] a better citizen.