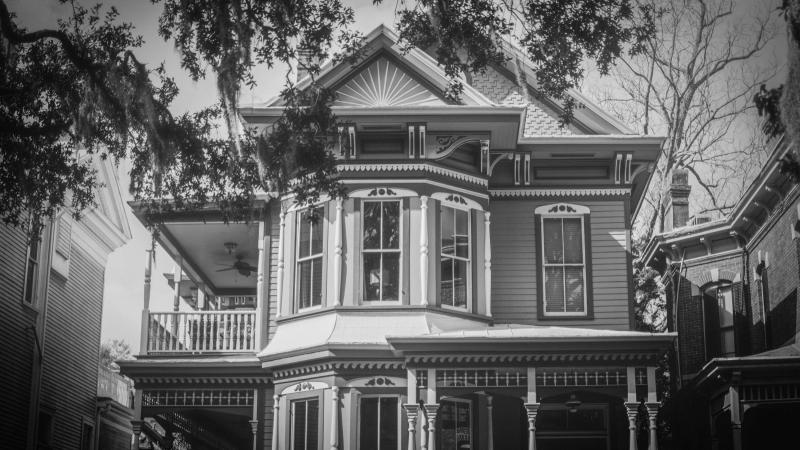 Some ghost stories are more than just about ghosts. Consider the Sorrel-Weed House in Savannah, Georgia. It’s been called the “most haunted house” in Savannah, which has its own reputation as America’s most haunted city. The “ghost tour” of the Sorrel-Weed House is one of Savannah’s big tourist attractions. But when historian Tiya Miles went to visit, she found another story of slavery and racial stereotypes buried in this history.

The Sorrel-Weed House is a home in the historic landmark district of Savannah. It's a beautiful 19th century home built in 1838-40. It's famous in Savannah for being haunted.

The story is quite a complicated and disturbing one. It has to do with the home builder Francis Sorrel and his supposed relationship with an enslaved woman on his property. Francis Sorrel was a merchant — he did build his wealth on business, but he still kept a number of slaves on the Sorrel property. So this is a picture of slavery that's not the vision that we tend to think of: it's not a large plantation with hundreds of African-Americans working along roads. Instead, it’s an urban slavery situation, in which Francis Sorrel has this beautiful Greek Revival stucco manor house. He has a courtyard separating the house and the carriage house where he has enslaved blacks live.

The way the story goes, Francis Sorrel supposedly had an intimate relationship with an enslaved woman in his household. His wife Matilda Sorrel found out about what is termed as an affair by the tour guides at the home, and she was so distraught at Francis's betrayal that she jumped off of the home’s balcony. She landed on the courtyard below and died. Matilda is said to haunt this house.

About a week later, according to the story, the enslaved woman (whose name is Molly) is said to have been found hanging from the rope in the center of the room where she and Francis Sorrel supposedly carried out this relationship. The story goes that it's not clear who may have murdered Molly: it could have been Francis Sorrel himself trying to hide his misdeeds; it could have been a slave, perhaps even one of Francis's own children who was trying to get revenge for the death of Matilda. Regardless, Molly is also said to be haunting that house.

The whole story about Molly and Francis being involved with one another cannot be verified. Matilda Sorrel did commit suicide. However the question of motivations and secret relationships cannot be verified by any of the evidence. So this story seems to be — in large part — myth.

On the day that I visited the Sorrel-Weed House, people could actually go into the slave quarters of the home. On the evening tour, a video is played of SyFy Channel's visit: you get to see their ghost investigators encountering different kinds of experiences there, and you get to hear that they think that this house really is haunted. As a part of that video, they play the sounds of the enslaved woman Molly screaming and begging for her life as she is being murdered.

There could be many options we could imagine for attaching a sense of haunting to a house. And yet, the choice here was to talk about an enslaved black woman who is in a situation of sexual exploitation, who is then violently murdered. As well as a white woman who is in a position of privilege in the household, and yet is still subject to her husband's power and a patriarchal situation, who chooses to end her own life because she feels betrayed by her husband's actions.

To me, this story is all about violence against women and suffering of women. It concerns me deeply that this is a story that was created to boost visits to a historic home.

I have to say, these kinds of stories and these kinds of experiences do two things at once. They submerge the actual violence of the period of slavery at the same time that they actually make a profit off of stories of people who suffered through slavery.

I think it's an amazing trick to be able to pull off both those things at the same time. But it is happening at a site like this and at other sites.

Even though every region of this country has its histories of trauma, for me the South stands out. It has so many (and old) layers of violence and land theft targeted toward specific groups of people. Native American slavery in the South. The seizure Native American lands in the South. African American chattel bondage in the South, on a large scale.

To me this makes the south kind of a place that is always going to be haunted.