Soundwalking the City with David Rothenberg 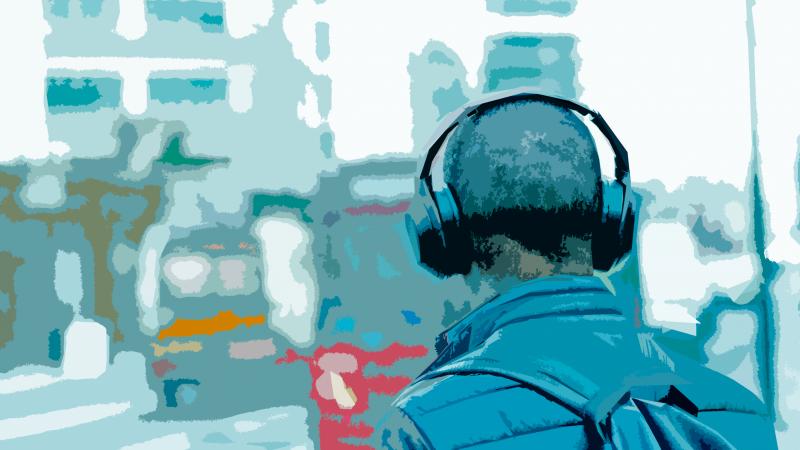 The screeching of a fast-stopping car, the ding of an elevator, the flapping of pigeons, the clicks of heels, the whispered voices and voluble shouts. The sounds of a city are real and natural, in a different but no less arresting way from sounds in a forest, jungle, ocean or farm. Or so argues David Rothenberg, who co-produced an episode of "To the Best of Our Knowledge" that makes the case for exploring cities with our ears.

A composer and environmental philosopher, Rothenberg is best known for his work with sounds of nature: birds, whales and bugs, particularly. He said he’d avoided exploring the city — until he realized the sounds people typically try to tune out actually make each block unique.

"Usually people are trying to block out the noise of the city but it’s actually interesting if you turn it up," said Rothenberg. "With this heightened sensory information it makes you more alive."

The way to hear the true sounds of a city, he found, is not by seeking out particular noises, but instead walking and wandering, seemingly aimlessly — using recording equipment and headphones to aid in discerning individual sounds from the sonic terroir.

To hone his method, Rothenberg wandered the streets of Manhattan, searching less for specific sounds and more for moments of beauty amidst the bustle you typically hear on the street in New York City.

"I wanted to be surprised," said Rothenberg. In the course of his "soundwalking," surprise had a way of finding him.

At the George Washington Bridge, Rothenberg approaches a construction worker who at first insists he doesn't have anything interesting to share with the microphone. David explains he's just wandering and listening to the city, and the man opens up, musing on what he prefers not to hear in the course of his day: a body falling into the water. He’s heard it too many times, this unusual and unmistakable sound of someone jumping off the bridge.

People are not the sole noisemakers in urban space.

In a "tree-listening walk," Rothenberg is joined by David George Haskell, the author of "The Songs of Trees: Stories From Nature’s Great Connectors," crunch-walking on mulberry leaves, listening to insects and voices and investigating the arboreal residents of Manhattan. With 20 percent of New York City having tree canopy, Haskell said, the city offers a fascinating urban nature walk.

So how does one listen to trees?

"Part of it is just showing up, year after year, to the same tree," said Haskell.

He listens with his hands, touching the trees. He hears how insects interact with the trees.

"If you put your ear up to the base of the tree, you can hear the scratchings of the woodpeckers in the top, the creaking of branches transmitted through the wood and into your ear," Haskell said.

Haskell and Rothenberg take in the completeness of a pear tree planted on a city block, complete with the sounds of helicopters, chewing insects and talking humans off in the distance. Some of the sounds hearken back to days past in the same place. The sunlight, too, has been shining in these very spots for generations.

Even what is new — cars and honking horns, subway stairwells swollen with riders en route, the bustle of digital bells and dings and alerts emanating from a thousand pockets — have a relative history to the place.

"The traffic is an echo of the energy that was present in the age of dinosaurs," Haskell said.

People have both changed the soundscape and are integral parts of it.

"Humans emerge from another part of the tree of life," Haskell said.

Haskell's insight reminds of his work listening to birds, especially nightingales, in another city, Berlin.

"They are not seeking silence," he said of the nightingales. "They pick territories and trees next to trains and busy spots."

It is this act of coexistence — the humans making sounds that the birds enjoy, and in turn the humans appreciating the nightingale’s songs — that shows how people and nature rely on and delight each other.

"I’m interested in the overlap," Rothenberg said. "We’re in this all together."