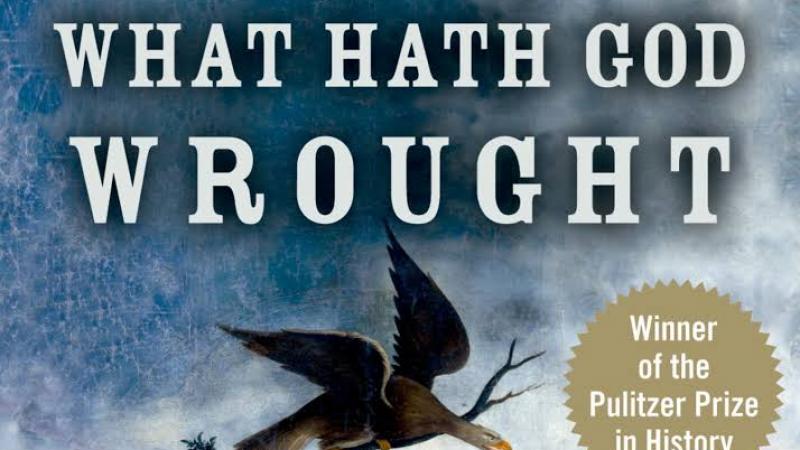 When and how did American get so polarized? For answers, Jonathan Chait recommends reading "What Hath God Wrought,"  a history of American politics from 1815-1848 by the Pulitzer prize-winning historian Daniel Walker Howe.

The book I want talk about is "What Hath God Wrought" by Daniel Walker Howe, which is part of the Oxford History of the United States of America. It covers the period from 1815 to 1848, which is a fascinating book which has really changed the way I've thought about American history. Even though — and in some ways, because — it covers a time period that I didn't know very much about, and receives probably less treatment in popular culture than a lot of other periods, but is really a crucial one.

This was a time when America expanded massively at the expense of different kinds of people who were living in the periphery of white settled American life. At the beginning of this period, it wasn't clear that American power would prevail over these lands in the way it ultimately did. But I think the thing that makes this book so fascinating to me is that it re-frames the whole history of the intellectual debate in American life. What Howe argues is that you had two really important ideas that were fighting with each other for supremacy.

You had the Jacksonian idea, which is the one that prevailed in most of this time, which was that the Democratic Party — then based in the south and very, very suspicious of the central government — was in favor of slavery and resistant to any changes to the social order, including more humane treatment of Native Americans and more rights for women. And then you had the Whig tradition — which was based in New England — and was based on a more active role for the federal government. [Members called for] more liberal social relations and less aggressive foreign policy.

I think if you really studied that debate as it existed at the time, this gives you a template for the political arguments that we see today. It's especially interesting because for a long period of time after the Civil War, things got very, very scrambled. The Democratic Party stayed the party of the south. And then the North had the Republican Party, which for a while was a very left-wing party at the beginning, but then stopped being a left-wing party and became a right-wing party. Then the Democratic Party eventually brought in all the liberals and the liberals took it over.

These parties that were scrambled for well over 100 years, and we couldn't see that where we're at now is the same place we were in the time that Howe was writing about, the beginning of the 19th century. Where you had this Yankee tradition against the southern tradition, which is still the debate we have. You can really see the divided, polarized, red-versus-blue America emerging in a much clearer way 200 years ago.

That's the use to which I've really been putting this book.