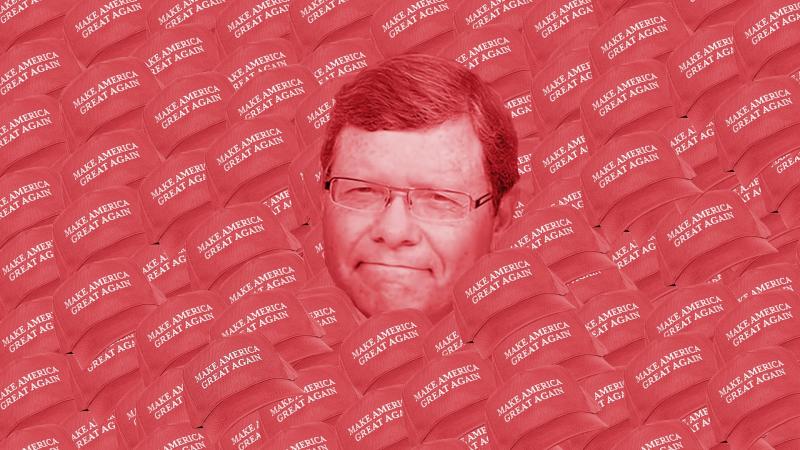 Everything changed for Milwaukee radio host Charlie Sykes one morning last year when Donald Trump called into his show. “At 8:29 a.m. on the morning of March 28th, I was a right-wing talk radio hack. By 11:00 a.m. that morning, I was one of the deepest thinkers in American politics.” He now chuckles when recalling the incident, but it was no laughing matter back then.

Sykes was Wisconsin’s most popular conservative talk radio host, but he was also a critic of Trump. So when Trump called into his show, Sykes urged the candidate to apologize for making disparaging comments about the appearance of Ted Cruz’s wife. Trump refused and Sykes then accused Trump of acting like “a 12-year old bully on the playground, not somebody who wants the office held by Abraham Lincoln.” The conversation went downhill from there.

Not long after that, Sykes quit his talk show and became an increasingly outspoken critic of Trump and the Republican Party. He still calls himself a conservative, but he’s now a regular contributor to MSNBC and is working on a podcast with WNYC Radio. He has also written a book, “How the Right Lost Its Mind.”

Sykes recently stopped by our studio for an interview.

Steve Paulson: Why didn’t you come to the same binary choice as other Republicans and see Hillary Clinton as the greater evil? Why not hold your nose and jump on the Trump bandwagon?

Charlie Sykes: There are just some lines you don't cross. I understand and respect the people who made the binary choice on an issue like, for example, judicial appointments. But there are some moments where if you fundamentally believe that someone is unfit to be the president — someone who is a serial liar, a con man who mocks the disabled and women, who lacks both the temperament and the character to be president, you don't change that simply because he wins a nomination. He's fit to be president or he's not fit. I think Donald Trump taints both the Republican Party and conservatives.

SP: You say in your book, “For years we ignored the birthers, the racists, the truthers and other conspiracy theorists who indulge fantasies of Obama's secret Muslim plot to subvert Christendom or who peddled tales of Hillary Clinton's murder victims.” Why did you and so many other conservatives ignore those cranks for so many years?

CS: For years I did try to push back on that. But something changed in 2015 and 2016 where it became impossible to push back on fake news and misinformation because we had created these alternative reality silos. But could I have done more? Yes. Part of it was this sense that, well, they’re misguided but they're our allies. They're like the drunken bigoted uncle at Thanksgiving. You don't throw them out of the house but you assume that at some point you can turn on the game, you can change the subject and the center is going to hold. And it didn't. That was a fundamental moral failure on the part of the conservative movement.

SP: You say there is a “perpetual outrage machine” in the conservative movement. What do you mean?

CS: That's one of the key things that's happened to the conservative movement. You had this vast network of conservative organizations and conservative media that decided the way they could raise money, get clicks and raise their ratings was to keep the audience outraged and feeling betrayed all the time. That doesn't mean that there weren't things to be legitimately opposed to, but the perpetual outrage machine basically needed to keep people angry all the time. It was the business model. But the problem is, it's hard to turn that off.

SP: You’re criticizing our echo chambers — that we only pay attention to media on our side and what we already believe. Is there an equal echo chamber on the left?

CS: That's a really interesting question. There is an echo chamber on the left. There is an alternative reality silo. Of course I now contribute to MSNBC. And if you read Salon and watch MSNBC, you'll get a completely different view of the world than if you look at the Drudge Report, listen to Sean Hannity and read Breitbart.com.

I sense that it's become worse on the right. If you and I had this conversation 10 years ago, I would have said it was the opposite. But something flipped to the point where I do think that many people on the right willfully separated themselves from the mainstream of society and from fact-based media in a way that was shocking to me.

SP: Can you paint me a quick portrait of influence in conservative media: Fox News, Breitbart, Drudge? Do they actually make and break politicians?

CS: Yes. And you've named three of the four that are absolutely important. The Drudge Report is virtually the assignment editor for a lot of conservative media. So when the Drudge Report began linking to Alex Jones and Info Wars and other really toxic conspiracy theories, that was a huge moment in the conservative movement because it injected a lot of this toxic sludge into the mainstream. Breitbart is relatively recent but as the Columbia Journalism Review study demonstrated, with a huge infusion of money from the billionaire Mercer family they became the center of their own online media ecosystem that really drove Trump and attacked critics of Trump.

Fox News obviously is absolutely essential. People will often say MSNBC is the equivalent on the left to Fox News on the right, but that's really misleading. Fox News is far more influential. Roger Ailes wanted to be a king-maker. And for conservatives Fox News was the one that shaped their world view in a way where there's nothing comparable on the left. And then the fourth - besides the Drudge Report, Breitbart and Fox News — would of course be conservative talk radio led by people like Rush Limbaugh and Sean Hannity. They played central roles in the rise of Donald Trump. They have become the gatekeepers. And it's very difficult to imagine anybody winning a primary that doesn't have strong support on one of those four elements that I mentioned.