How A Colony On Mars Would Change Everything On Earth 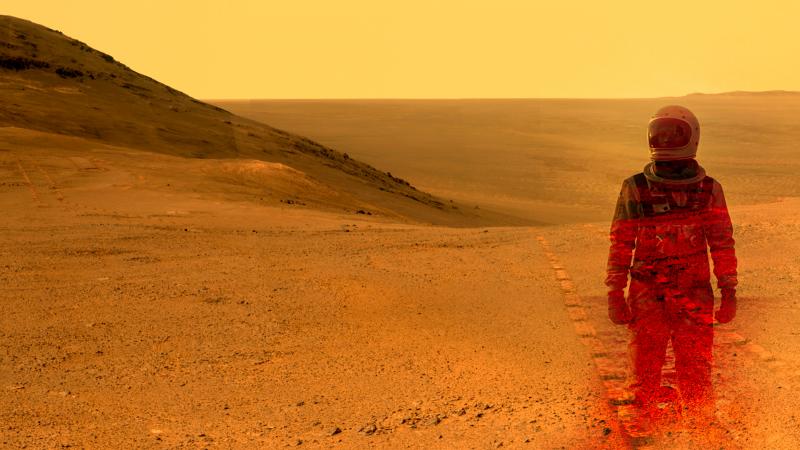 Fear about the future of the planet keeping you up at night? Aerospace engineer Robert Zubrin has a solution: it’s time to settle Mars. "We’re entirely ready," he said. "We're better prepared today to send people to Mars than we were to go to the moon in 1961. Given a serious decision, we could have people there within 10 years."

Zubrin has been trying to get to Mars for a long time. He spent decades with Lockheed Martin and Martin Marietta Astronautics, working on knotty problems in space propulsion and making plans for interplanetary colonization. At 67, he’s putting his hope in Elon Musk’s Space X program.

"If it keeps moving forward at the rate it currently is" Zurbin told Charles Monroe-Kane for "To The Best Of Our Knowledge," "I’d say they’ll land before the end of the 2020s."

His prediction? It’ll be the best thing that could happen to Planet Earth.

Charles Monroe-Kane: What’s in this for Earthlings? Why colonize Mars?

Robert Zubrin: A number of reasons. There’s the one NASA gives — for science. There’s the positive stimulus of the challenge, especially for the youth. But here’s the thing: what is the greatest danger humanity faces? What caused the disasters of the 20th century? Bad ideas! In particular, variants of one continuous bad idea, which is that there isn’t enough to go around, so we have to push other people aside and even exterminate them in order to take what there is.

I know for a fact — because I've spoken with them — that there are people in the Pentagon who look at the rise of China and say "this has got to be stopped; if they all become middle class, there won’t be enough oil in the world." If that kind of thinking prevails, it will lead to more wars.

Human exploration and settlement of Mars is a disproof of this theory. We can open up whole new worlds of resources if we exercise our creativity. It’s the only positive answer.

CMK: How would this work, exactly? What’s the plan?

RZ: The way to go is with a few small exploration missions to find the right place for a permanent outpost. Then you send lots of cargos with habitations. Then you send a few groups of people to set up greenhouses for food production and facilities to manufacturer plastics, steel, propellant, and oxygen. And once you create the capacity for people to be self-supportive, you can send more and more of them.

CMK: What about water?

RB: There's water on Mars — and not just at the poles. That’s one of the discoveries to come out of NASA’s very successful robotic planetary exploration program. We have now discovered glaciers on Mars at about the same latitude as San Francisco on Earth. They contain more water than the American Great Lakes and they're covered by only a few feet of dust and sand. So they're within shoveling distance.

CMK: But why should we go and screw up another planet, when we haven't fixed the mess we made of this one?

RB: Some people compare humans landing on Mars to Europeans destroying the Native Americans, along with the bison and the redwood forests. And there’s no question that something precious was destroyed in that process. But if there had been nothing here when Columbus landed but a barren desert, and a bunch of rocks with some bacteria hidden under them, and people turned that into a continental nation of liberty with 1,000 universities and 100,000 used bookstores, would anybody be picketing Columbus Day parades today?

CMK: So Mars will be a utopia?

CMK: Meanwhile, this planet’s in a lot of trouble. Why are you so hopeful about the future?

RB: Because I think hope is essential. Despair is the worst of sins because it causes you to give up striving for anything better.

This planet is not little; it comes with an infinite sky. And if we’re not confined to this part of it, but have unlimited reach into all of space, then there’s no need to fight over this tiny corner of the universe.