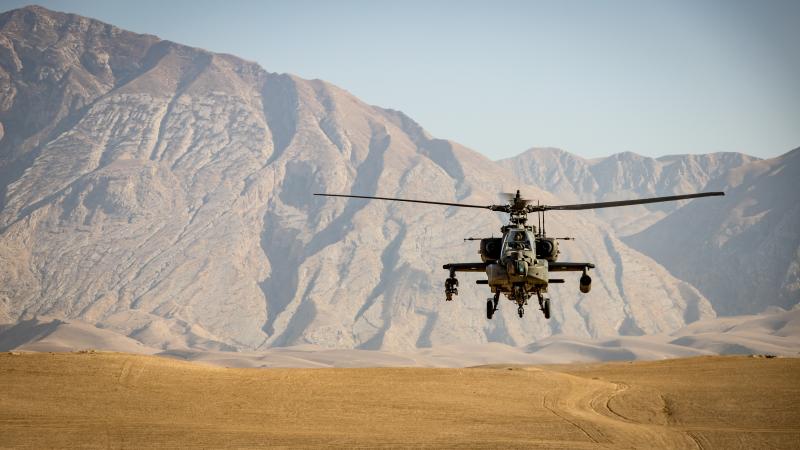 In 2012, Rafia Zakaria sat in a nearly full movie theater in Indiana and watched Jessica Chastain supervise the torture of a suspected Al Quaeda terrorist. The film was "Zero Dark Thirty," Kathryn Bigelow’s fictionalized account of the U.S. capture and killing of Osama Bin Laden. The entire film, Zakaria said, "revolves around this idea that a strong feminist woman is one who is willing torture and hurt men who look like my father and brother."

When the theater audience gave it a standing ovation, Zakaria cried. It was, she said, "gender equality at its most perverse."

An American Muslim attorney, political philosopher and human rights advocate, Zakaria recalls that moment in "Against White Feminism," her bracing new counter-manifesto to mainstream American-style feminism. She spoke with "To The Best of Our Knowledge's" Anne Strainchamps about how the U.S. war in Afghanistan became what she calls the "first feminist war."

Rafia Zakaria: The story of how Afghanistan became the first feminist war begins in the late 1990s, when the Feminist Majority Foundation was running a campaign to "Stop Gender Apartheid" in Afghanistan. Mavis Leno (Jay Leno’s wife) heard about it and held a huge Hollywood gala fundraiser with Meryl Streep and Susan Sarandon and lots of other big stars.

Anne Strainchamps: That’s when Afghan girls and women became a cause celebre?

RZ: Exactly. Then after 9/11, when the Bush administration was gearing up to invade Afghanistan, they turned to the Feminist Majority Foundation — so much so that when (Secretary of State) Colin Powell announced invasion plans, leaders of the Feminist Majority were present at the State Department and at the White House.

That was probably one of the first times in modern history that the Western feminist movement, instead of serving as a check on state power — as it had in previous wars like Vietnam — allied itself with a war project. Hillary Clinton and Madeleine Albright, Laura Bush and Gloria Steinem supported this action, even though at that time there were indigenous Afghan feminists on the ground who were very much opposed to it and were arguing for peace.

AS: Well, the idea at the time was that getting rid of the Taliban would not only strike a blow against terrorism, it would also open the door to more rights for Afghan women — like education, and jobs and the right to self-determination. Those seem like good goals. What’s wrong with that argument?

RZ: What’s wrong is that you cannot simultaneously bomb a country into the Stone Age and then also say you're going to empower and uplift women. What’s wrong is that those goals were used as window dressing to hide the mayhem — the night raids on homes, detentions, people being dragged away for months, families not knowing where the father or brother has been taken. And as a consequence, things like education or empowerment or job training for women and girls got de-legitimized because they were attached to this very painful and derogatory foreign occupation.

AS: Are you saying the administration and the military invoked feminism — deliberately and cynically — in order to build support for the war? And that mainstream American feminists were duped into supporting it?

RZ: Yes. I mean, I understand the temptation. At the outset of the war, American feminists essentially were told, "You guys are feminists, you’re strong, you’re empowered — and we’re going to export you and your greatness to this environment where women are oppressed."

And this narrative was very convincing because it placed the United States on high moral ground. Even though it was repeating a very colonial message of "white men saving Brown women from Brown men," which is the famous adage (coined by post-colonial feminist theorist Gayatri Chakravorty Spivak).

AS: And yet, during the coalition force occupation, humanitarian aid ramped up in Afghanistan, and we began seeing more shelters for women and schools for girls and jobs for women in the government. So speaking pragmatically, didn’t women's lives improve?

RZ: I’m from Pakistan, and this is typical of a lot of projects that try to empower women. In the short run, yes, there was an improvement. But because it was a top-down thing, and the funding was external, there was really no cultural or political buy-in to the increased presence of women in schools and workplaces and the government.

So it was essentially a gamble, that if they just got some women into these roles, it might foment a social transformation in Afghanistan. And, of course, the events of the past couple of months have shown that that's not true.

AS: This is what you call "trickle-down feminism?"

RZ: Exactly. Trickle-down feminism was how women's empowerment within Afghanistan basically failed. Because it doesn’t trickle down, that’s the first lesson. You can’t take feminism and shove it down people’s throats by importing it with bombs. And because feminism is not a technocratic program of economic liberation. But in today’s neo-liberal discourse, you see this idea everywhere, that if you give a woman a micro-loan, or a chicken, or you buy her a sewing machine, she’ll make that into a business. It doesn’t quite work that way.

AS: Because not every woman in the world wants what empowerment has come to mean for mainstream American feminists? A career and a glass ceiling to bust?

RZ: Yes, I mean this emphasis on economic rights came about because women in the U.S. were largely insulated from the shocks of the global economy and instead focused on getting equality with white men. So equal pay became a central feminist issue. But Afghan women might prioritize something else — like physical security. Or training more women in Islamic law so they can challenge the version of Islam that the Taliban is offering.

AS: How much of this do you think goes back to colonialism, which seems to have left its sticky traces on everything?

RZ: Yeah, you know, several years ago there was a spoof called "White Savior Feminist Barbie," where people would pose Barbie among crowds of Black children or Indian women. I think it’s important to recognize that white feminism gets some of its self-righteousness from presenting that contrast — between the white women as progressive, forward-looking and pioneering, and all other women as oppressed and far behind in their journeys to feminism and empowerment. That’s a legacy of colonialism.

AS: So going forward, what would real sisterhood look like?

RZ: I think real sisterhood would be a very intentional and pointed effort to have these difficult conversations around race so that we can recognize the real battle, the larger battle — which is against patriarchy. And I actually think this can be done, because in the U.S. at least, among younger white women, I see great interest in understanding this and putting it into practice in their lives. So I really believe in this project.