Hiding Yourself Behind Characters 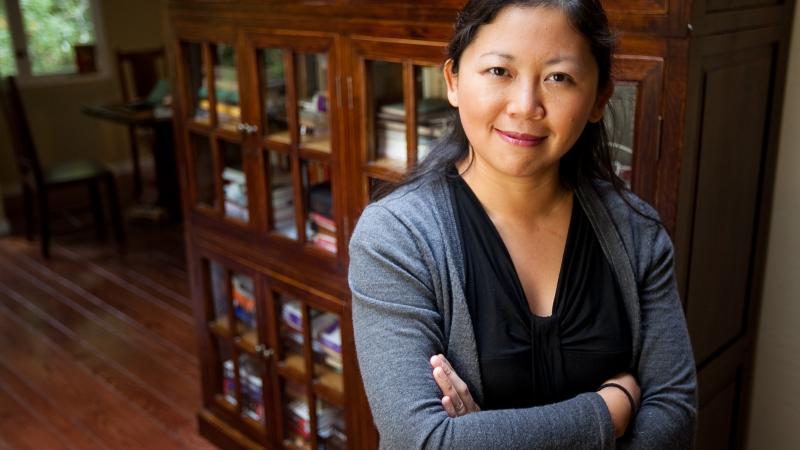 Yiyun Li is an acclaimed fiction writer and the winner of a 2010 MacArthur Foundation "genius" grant whose books have been translated into more than 20 languages.

She grew up in China, then moved to the United States to be a scientist before discovering her true calling as a writer.

She has always claimed her writing is not autobiographical, but now Li has written a revealing memoir called "Dear Friend, from My Life I Write to You in Your Life."

The book delves into very personal matters, including her decision to abandon her native language to write in English, as well as her two suicide attempts.

Li told "To the Best of Our Knowledge" host Steve Paulson she felt she finally had to step out of the shadows to write directly about her own life.

This interview has been edited for clarity and length from the original broadcast.

Why Li Stopped Hiding Behind Her Fiction

When writing fiction, it’s easier to hide behind the characters. I was trying to erase myself as much as I could, but I think hiding is not the best way for a writer. That’s how I felt when I started writing this book because it was written after some difficult times. I think the whole point of this book is not to hide anymore.

There are so many ways to look at mental illness. I was an immunologist before I was a writer. I look at the two or three years of this extreme situation as an autoimmune disease of the mind, which means whatever feelings my mind created, it was always becoming the target of my own thinking.

When I was working on the book, the only thing I could do was see how I can target my mind with analysis rather than just irrational feelings. So you have to open up all the wounds before they can heal.

How She Became A Writer

When I was young, I was a mathematical genius, a little prodigy. When I was a scientist, I thought I was going to become the Madame Curie of China. It didn’t happen, which disappointed everyone. I came to America to become an immunologist, and I happened to land in Iowa City, where everybody writes. So I took a couple of writing classes and really fell in love with writing.

I was greedy. I wanted everything. I needed a full-time job. I wanted to take care of my two young children. But I also wanted to write. So when you have young children, there’s really no time to write. But from midnight to 4, that was the only time I could get away from my life to focus on my writing, so I did that for about 10 years.

Why She Abandoned Chinese To Write In English

I’d never written in Chinese. I always had a complicated and intense relationship with the Chinese language. I call it a "public language." It’s really a propaganda language that’s used in everyday life, and I had a strong dislike of that kind of language, so I never thought about writing.

When I was in the Army, I could write beautiful propaganda. So I took up English as my private language. English is also the language I use to think and sort through everything in life. I think English provides this space for myself that I could not do with my native language.