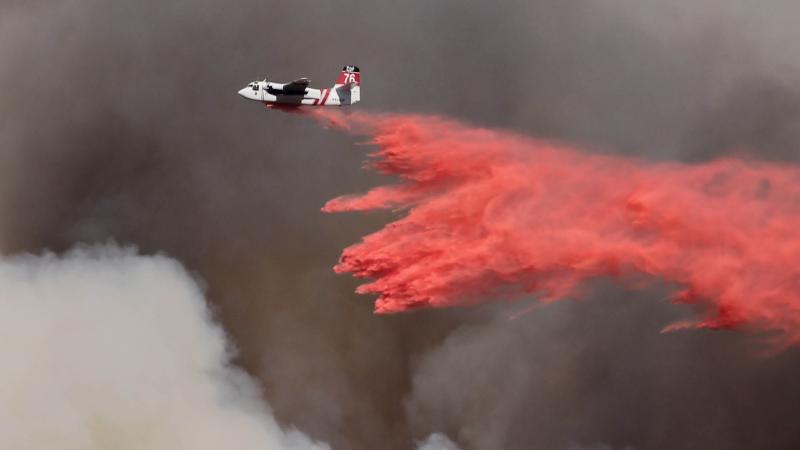 Phoscheck drop during the 2013 Springs Fire, one of an ever growing list of wildfires in California due to hot, dry conditions and drought. Ben Kuo (CC0)

Some of the most devastating wildfires in the history of California have killed 32 people so far and ravaged a large area of the northern part of the state. That devastation got us thinking about the hardworking firefighters risking their lives to try to save who and what they can. Their experiences likely resemble that of Mary Pauline Lowry who — for most of her life — worked as a member of a hotshot crews fighting wildland fires. She wrote a novel called “Wildfire” based on her experience, and Steve Paulson spoke to her about it.

Steve Paulson:  After you left college, you joined a hotshots firefighting crew. Can you explain what that is, what does a hotshot crew do?

Mary Pauline Lowry: So a hotshot crew is a group of 20 firefighters. They’re wildland firefighters that live together, train together, work together and travel the U.S. fighting wildfire together for six to eight months a year. It's considered to be an elite fire crew and they were originally named because hot shots were put into the hottest, most dangerous parts of the fire. But then it's also a very appropriate name for hotshot crews because people that are on hotshot crews tend to think that they’re hot shots. So there's a lot of machismo, a lot of attitude with that. And hotshot crews are typically I think about 90 percent male, many crews have no women on them at all. Some crews have one or two women. But to this day it's not a job that very many women do.

MPL: Well I wanted to do it because I was always very drawn to fire. My best friend in college, Della, at that point was working on a fire crew that was what's called a Type 2 crew that doesn't live together, that just is pulled together for a particular fire. But her sister Addie, who was a little older than we were, was on a hotshot crew and was traveling all over the country with 19 men battling wildfires. And that just looked to me like the greatest job that I could have just coming out of school.

SP: Now were you the only woman on the crew?

MPL: No, the first year that I fought fire, there were two other women on my crew. We actually started out with four and one was sent home for not being able to hang. The second year I was on the crew, there was one other woman.

MPL:  So when I arrived, I did not get a warm introduction. But then I'll say I don't think anyone gets a warm introduction when they arrive on a hotshot crew. Because the work is so dangerous and it's so crucial that you can trust the members of your crew, everyone goes through a period of being tested and hazed a little bit. And I just was arriving in a culture that was very different than the culture that I grew up in. I grew up in Austin in a relatively urban environment, very Texas culture environment. And I was working on a crew that was in Colorado with these guys that had grown up in the woods. Very tough men. And so arriving was very, very intimidating. But my friends Addie and Della, who fought for her before me, really had given me a strong education in how to act as a representative female on a fire crew. And there are many elements that have to be balanced. The first one is that you can never ever complain. It doesn't matter if you're sleeping in a ditch, in a rainstorm. It doesn't matter if it's 30 degrees and they can't get you a sleeping bag. It doesn't matter if you haven't eaten in 19 hours and you feel like you're going to faint.

You can never, ever complain. So that was the first thing that they taught me. They also taught me that I had to show up for it. And so I trained really hard for that. And then they also told me that it's very important to not arrive on a hotshot crew thinking that you're the bachelorette. You know, you have to show up and really keep your sexuality under wraps. The more that your crewmates can kind of forget that you're a woman, the better you're going to do.

SP: Yeah. Now as I understand it what you actually do on a hotshot crew is different than say what smokejumpers do. I mean you're not parachuting out of planes you know dropping down into a burning forest, you're doing something different?

MPL: Hotshots hike into fires and often they hike pretty far into fires. Sometimes they're helicoptered into fires. Smokejumpers, they jump out of airplanes to get to fires so they are usually attacking smaller fires in more remote areas that are difficult to access, you know, where you can't hike in four or five miles off a road, where you really need to be dropped in. Once the smokejumpers hit the ground the job is similar in many, many ways. But no, hotshots do not jump out of airplanes.

SP: And so what do you do actually as you're going in to meet this raging fire? What's your job?

MPL: The hotshot crews hike into the fire and then once they arrive at the fire, they create what's called a fire line. So they do not use water to fight fire, instead they remove fuel. So fire needs three things to burn -- it needs oxygen, fuel, and heat. So a hotshot crew creates a fire line which removes the fuel. So there are sawyers on a hot shot crew and there's diggers. And so sawyers use chainsaws to create like a 15-foot break in the canopy of trees. And then diggers come through and scrape down 24 inches down to mineral soil. So ideally, the fire will burn right up to the edge of that fire line and stop.