From Benign to Deadly: A Brief History Of Household Poisoning 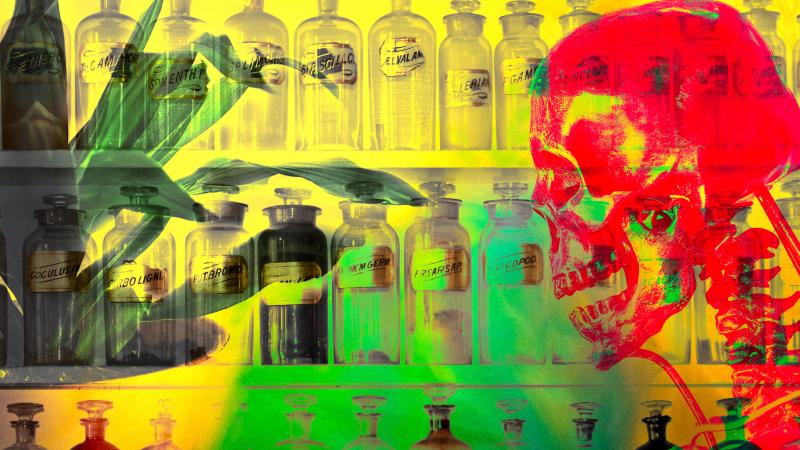 While not as terror-inducing as a demon or ghoul, the sheer number of things that could kill us by swallowing them is truly terrifying. Throughout history, we've been surrounded by substances that seemed benign and innocent in our food, in our gardens, in our medicine cabinets — until we realized they could be slowly killing us. We spoke with three experts in the history of poisonous substances and put together a breakdown of the items that you definitely want to avoid having anywhere near your home.

How did it get into the house? At the end of the 19th century, dairy producers were trying to combat the problem of milk contaminated by unsanitary production, or in some cases being adulterated by unsavory producers, who watered it down with contaminated water. While formaldehyde was then — as it is now— used as an embalming fluid for preserving flesh, it was also deemed an effective preservative and decontaminant, so long as it was used in very small doses.

But meat and dairy producers had also found that using it to preserve beef and milk was an effective way to ship farm products far and wide, or even restore the taste of milk that had already gone bad. They started marketing it as "embalmed beef" and "embalmed milk" and insisting that it tasted great. According to science writer Deborah Blum, author of “The Poison Squad,” it gave milk a sweet taste. "Take this with a grain of salt because I don't drink formaldehyde," she says.

When did we first realize it was dangerous? Meat and milk producers embraced increasingly higher doses of preservatives containing formaldehyde, and the longer food was preserved, the more toxic it became. Frequent consumers of embalmed food were getting sick, especially children. Higher doses of formaldehyde caused frequent deaths, including one case in 1901 in Indiana where there were 400 documented deaths caused by ingesting formaldehyde.

How did it get into the house? "Coffee [in the late 19th century] was simply a mix of a little coffee and a lot of fake," says Blum. "People would char bones and crumble them in; they would dye sawdust with lead-based blacking compounds and mix that in."

When did we first realize it was dangerous? Well, the coffee tasted like crap. According to Blum, there's been speculation that the expression "a muddy cup of coffee" came from disgruntled coffee drinkers thinking they might literally be drinking a cup of mud. In the time before food regulation, you weren't always sure what you were going to get.

How did it get into the house? Even more innocuous than formaldehyde, Borax had made its way into homes as an effective household cleanser. "They discovered that it also had antiseptic qualities—it was anti-microbial," says Blum. "And it doesn't taste that bad, which is one of the things that's really important."

That also made it a tempting preservative for dairy producers. It became an ingredient in butter being shipped to England, spurring industry figures to claim that "the British love the taste of Borax in their butter."

When did we first realize it was dangerous? It wasn't immediately apparent, and was one of the initial substances that drew the skepticism of food safety pioneer Harvey Washington Wiley. He employed his "Poison Squad" to test, among other substances, increasingly higher doses of Borax alongside standard dinner fare. "What they found was that at very low doses, some of them were a little whiney but no one was really sick," says Blum. But in medium and higher doses? The young men started complaining of stomach pain, bloating, GI issues, headaches and worse. It gave Wiley the data he needed to help make the case for the passage of the 1906 Meat Inspection Act, which paved the way for the government to act as a consumer watchdog when it comes to dangerous substances.

How did it get into the house? A frequent part of a grazing ecosystem found in Indiana, Ohio and Illinois, cows put out to graze on poor-quality land would eat this plant and become sick. "The sickness has been called puking fever, sick stomach, the slows, and the trembles," according to the National Park Service description of the plant. "The illness was most common in dry years when cows wandered from poor pastures to the woods in search of food."

When did we first realize it was dangerous? Amy Stewart, author of “Wicked Plants,” says the plant would simply make the cattle ill to discourage them from eating the plant, but since it also got into their milk, people were inevitably affected as well. "People would drink the milk, get sick and die." This so-called "milk sickness" claimed its most famous victim in the mother of President Abraham Lincoln. Nancy Hanks Lincoln died on October 5, 1818.

Stewart says white snake root is just one example of why it's important to recognize that plants are just trying to survive, and toxicity is just one possible strategy for them. "It's a mistake to think that because something is green and comes out of the ground, that it's all-natural and therefore good for us."

How did it get into the house? Foxglove was recognized for its utility in treating cardiac conditions as early as 1785. That said, the plant didn't get a stamp approval from the Food and Drug Administration until 1998, when conventional medications based on the plant were tested and approved for use by patients with congestive heart failure.

When did we first realize it was dangerous?  The entire plant is poisonous, and taking large doses of any part can cause vomiting, diarrhea, headaches, hallucinations, and — in rare cases — death. Herbalists abandoned using it because the benefits are narrow and the risks of overexposure are too great. "It's a great example of a plant that is both medicine and poison, depending on the dose and who's taking it," says Stewart.

How did it get into the house? It probably didn't get there without some light treason. The Russian KGB started using it as a poison to attack enemies of the Russian state in the 1960s and 1970s.

Like strychnine and cyanide, ricin is 100% plant-based, derived from the extract of a castor bean seed. So if you have a nefarious botanist in your life (or as the case may be, a deranged chemistry teacher turned meth kingpin) there's a chance that the ricin was homemade.

When did we first realize it was dangerous? For a long time, we didn't actually know how much ricin it took to kill a person — as late as the 1970s, we were testing doses on pigs to try to find the amount that would kill a comparably-sized human.

How did it get into the house? Tobacco has been used as a natural pesticide for generations. Home gardeners in particular found that a cigarette-butt brew was useful as a homemade insecticide for their roses.

When did we first realize it was dangerous? Chemist Kathryn Harkup, author of “A Is For Arsenic,” tells the story of an unfortunate man who kept his nicotine brew in an old brandy bottle, snuck off to his shed to have a secret drink in the middle of the night, and accidentally drank the nicotine brew instead. He tried to counteract the poison with milk once he realized what he'd done, but he was too late.

"He was dead before he could raise the milk to his lips."

How did it get into the house? In 1850s-era England, arsenic was embarrassingly easy to get acquire, a frequent cosmetic product used by women to improve their complexion by eating it, or lightly rubbing it on their skin. "Before the 1850s, you could just walk into almost any shop and just ask outright for arsenic, and they'd just hand it over to you," says Harkup.

When did we first realize it was dangerous? The dark nickname the "inheritance powder" was a red flag — the substance was a largely-untraceable poison until the 1920s."It was extraordinarily popular among British poisoners in the 19th century," says Harkup. "It was used a frightening amount to bump off spouses and various rich relatives"