Would You Build Your Own Coffin? With Your Dad? 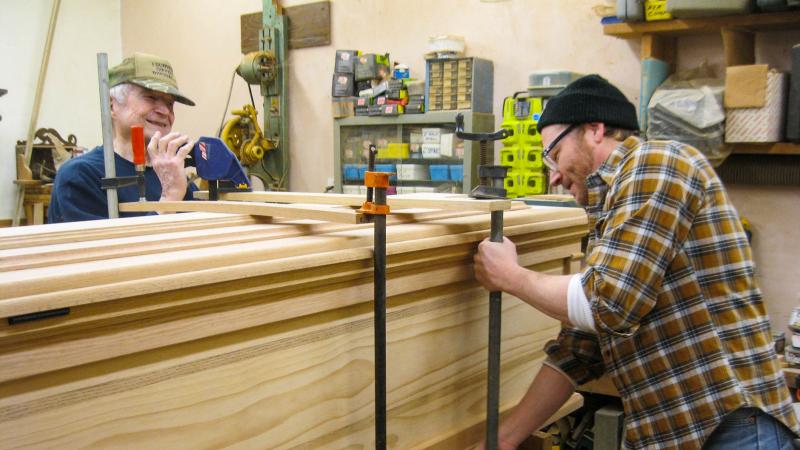 A couple of years ago, David Giffels took on an unusual woodworking project — he started building his own coffin. With his 80-year-old father. But when his mother died, followed by his best friend, his woodworking project took on a whole new meaning. David tells the story in a new memoir called “Furnishing Eternity," in which he runs down what the playlist at his own funeral might sound like. He's expanded those thoughts into an essay here.

When my mother died in 2012, I more or less spontaneously sat down with my iTunes and began compiling a playlist for her memorial service. It was relatively easy - her music interests hadn't been particularly deep, and she'd dabbled in disco and Tom T. Hall, which made for some easy eliminations. She loved Breakfast at Tiffany's, so Audrey Hepburn's version of "Moon River" was a lock. She'd entertained her children with her mimicry of David Byrne's arm-chop motions from the "Once in a Lifetime" video, so that was easy. And her drunken renditions of "The Schnitzelbank Song" were part of the family legend, so I threw that in.

A year later, my best friend died at age 48. John and I had shared a lifetime of music; it was our primary language. We'd gone to countless dozens, maybe hundreds, of shows together, traded mixtapes and fanzines, and had even briefly played in a band together. Our last conversation included him recommending the Parquet Courts record that sat on the table next to the recliner where he lay all day and night, wrapped in a ratty old Captain America sleeping bag with the air conditioning cranked, dying of cancer.

The playlist I made for John's memorial was much more of a mission, and I mean that literally. I wanted to compile it from his music library, which meant getting into his computer, protected by a password that no one apart from him knew. Fortunately, one of his closest friends was a military intelligence officer, who managed to hack into the laptop, unlocking a vast richness of Clash B-sides, the entire Wilco canon, odd soundtracks and "Kung Fu Fighting."

I spent hours alone at the desk in his bedroom, pulling song after song in what felt at the time like a final collaboration, but now, four years hence, remains an ongoing conversation. When I hear Elvis Presley, I laugh with him again over the night we went to see a dime store Elvis impersonator at a dive bar in Cleveland. When I hear Guided By Voices' "A Salty Salute," I am raising arms with him again in drunken brotherhood from a night long ago. When the new National album came out this year, I told him over the din that he would have liked this one.

So as I was completing Furnishing Eternity, a memoir about building a casket with my octogenarian father as he underwent treatment for cancer, I became determined to nail down the playlist I'd long wished to compile for my own funeral. The writing and the woodworking project took place simultaneously. I knew mortality was a theme, but I had no idea at the outset that my mother and best friend would both die right in the middle of the process. Making their playlists was its own exercise in narrative catharsis, a lesson that carried into the writing, and into the compilation of my own playlist.

This list, which appears as an appendix in Furnishing Eternity, begins with a song from the first record I loved, my parents' copy of a National Geographic Society compilation of cowboy songs, and it traces a loose path through my life, musical and otherwise. (I have already revised it, and will continue to do so until the inevitable occurs.)

This isn't the version from the record my parents owned. "Streets of Laredo" is a great American classic, but the recorded versions are mostly terrible, cornball with strings. I like this one best, in great part because it comes from an album called "Blood on the Saddle," which seems unintentionally hemorrhoidal.

2. Talking Heads, "This Must Be the Place"

My fondest childhood memories of my dad are of him in his basement workshop, me watching or helping as he tinkered. That little room was cluttered with paint cans and tools, odd scraps of lumber, coffee cans full of nuts and cotter pins, a jar of white powder with a handwritten label: "Plaster of Paris," accompanied by a caricature of the Eiffel Tower. Midwestern exotica. "Home is where I want to be, but I guess I'm already there."

3. The Pogues, "If I Should Fall from Grace with God"

John always made a particular ritual out of celebrating my birthday, which falls on St. Patrick's Day and therefore is very easy to celebrate in a particularly ritualistic way. This song was on a mixtape he made for me when I turned 21. Years later, we celebrated my 40th birthday together at a club in New York City, where I scribbled the title of the Pogues' "Bottle of Smoke" on an ATM receipt and kept hammering on the glass DJ booth, holding the note up until the guy inside finally played it to get rid of me. I shoved that scrap into my coat pocket and it stayed there until John died. Then I pulled it out and burned it in his honor.

Gina and I were a sort of live-action John Hughes movie couple: I was in an underground indie rock band; she went out every weekend in chiffon dresses and berets, dancing to New Wave and goth disco. And yet somehow we bridged the cultural chasm! This could easily have been a Depeche Mode song in her honor, but it's my funeral, honey.

6. The Replacements, "Kiss Me on the Bus"

We borrowed Gina's parents' car and drove through the night to our honeymoon — three nights in fabulous Virginia Beach — blasting the tape deck with all the windows down, singing at the top of our lungs.

Along the way to becoming a family, we struggled through a miscarriage, the first time either of us had felt like a grownup, defined here as finding yourselves in a situation no one can help you out of except yourselves. This was a song I played one night for Gina, trying to help. She started crying. I meant well.

She remained my one true constant.

Then we had a son.

And then a daughter.

11. The White Stripes, "We're Going To Be Friends"

And every fall they went off to school.

And every night we sang them to sleep. And life, despite itself and despite so much contrary evidence, was sweet and good.

But there's just no way to escape the burdens and the bitterness, the wine-dark surprises and the middle-of-night phone calls that are never, ever good.

15. The Postal Service, "We Will Become Silhouettes"

And we find ourselves trying, almost desperately, to make sense of that, reaching into a void in a fumbling attempt to rearrange what just happened, to exert some control - spiritual, intellectual, emotional — to the extent that some of the more ridiculous among us decide to fight back with baroque metaphors (e.g. the building of a coffin) in an attempt to unravel it, only to find at the end that the only truths that hold up are the simple ones. Life is short.

16. Bob Dylan, "You're Gonna Make Me Lonesome When You Go"

But it goes on.

And the more it goes on, the more it seems that the darkest days are not so different from the brightest days, each infused with a kind of energy that rages and floats, always forward, always illuminated, and that's probably all life is, more or less. A candle, a twist of smoke.

And we may or may not see the people we love in some other life, but they're always still here with us in this one.

As long as we laugh.

Editor's note: Since this interview David Giffels’ father, Thomas Giffels, has passed away. He was a retired engineer and master woodworker.