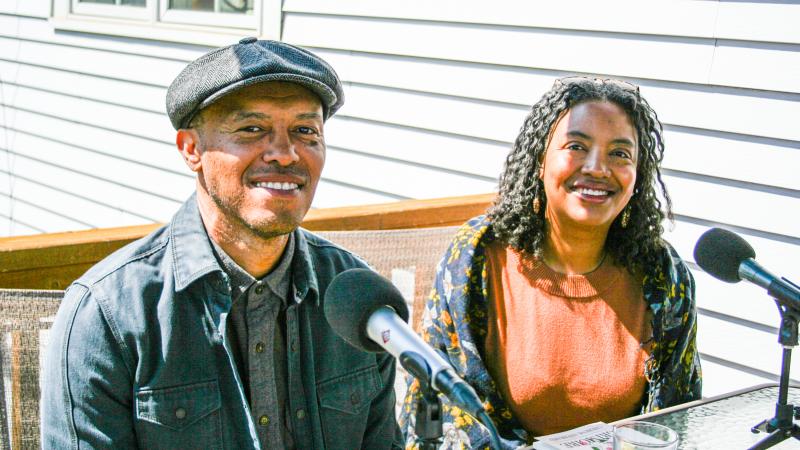 Poets and married couple Amaud Johnson and Cherene Sherrard live in Madison, Wisconsin. Parents to two teenage boys, Amaud and Cherene each have a new book out, which focuses on their roles as fathers and mothers. Steve Paulson visited them in their backyard.

my dear son: it won’t matter

how friendly you are, or honest

or which ivy league school

whether you hold the door,

shop with your hands out of

your pockets, or say “thank you”

after giving the cashier most of

your money, or saying to the local

barista or waiter, “fine, and how

are you.” it won’t matter if your

lawn is cut, or the hedges, or

whether the paint along your

whether your car is dented, or

carries a few seasons of wax.

whether you signal, or roll through

a four-way intersection, whether

you roll down all the windows

or spread your fingers against

the steering wheel or against

trace your palm for yet another

turkey. there are children and

there are no children. I think

i’ve failed to teach you how

to protect your heart. every

and cutting dark shapes into

corners of my throat. sound

being thumbed down to fit

into some undersized box.

and i feel angrier. and maybe

it’s the money or that how i

the first time a police officer

put a gun to my head, the night

was as still and musty and oily

as your body is now. I lost count.

but who counts? curbs and hoods

and concrete and sky. you know

your mother collected all your baby
teeth in a tea tin from England. some

nights, i’m sweating and the stars

start rattling in my head.

has trouble with fractions. When pregnant

I did not follow instructions, beat the yolks and sugar

together until very light. It was months before I accepted

I was carrying another human being, add 1/2 pound butter,

that is why he prefers brown sugar in his oatmeal.

He can’t tell how it’s different from white, flavor with

come out beautifully. The doctor is unsure about mine.

Paper and butter the pan, first a layer of the white,

then of the dark, alternately finishing with the white.