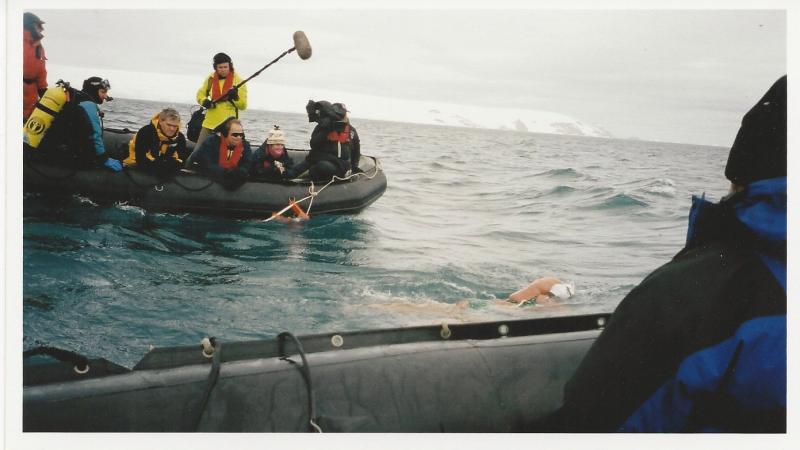 Cox was the first person to complete a 1.2 mile swim in Antarctica, from the ship Orlova to Neko Harbor in 25 minutes. (Lynne Cox)

At age 14, Lynne Cox swam to Catalina Island from mainland California. At 18, she swam between the islands of New Zealand. She broke the men's and women's records for fastest crossing of the English Channel and she crossed the Straits of Magellan.

Then, she decided to take on Antarctica.

"The currents and tides aren't mapped. They've been studying them down there for 17 years and people still don't know which way the currents move," said Cox, speaking to Steve Paulson for "To The Best Of Our Knowledge" in 2014. "And usually when you do a (English) Channel swim, that's one of the basic things that you figure out ahead of time. The weather there is so unstable it can go from very calm to 60 knot winds within 15 or 20 minutes. There's also the problem of ice. You can have glaciers snap off and become icebergs. And if you're swimming around them, it can be a bad thing. So those are some of the challenges."

Cox completed her swim in 2003, braving not only extreme weather, but wildlife — orcas, killer whales, and leopard seals — found along her Antarctic route.

Since then, the long-distance swimmer has authored several books, including "Swimming to Antarctica" and the memoir, "Swimming in the Sink." Cox talked with Steve about her adventures in the cold, open waters.

Steve Paulson: So you like this kind of danger?

Lynne Cox: I like this kind of exploration. I like the idea of pushing the body beyond what's been done and sort of feeling out what human beings can do and how far that reach can be.

Also, the other idea is that you're sort of jumping into this unexplored territory where people haven't been before in a bathing suit, cap and goggles. Just the sensation of it is so extraordinary to be in water that's 32 degrees and realize it feels so viscous because it is so thick, because it is so dense and it's just weird to have that kind of experience. But more than that, the water there is so clear — it's like moving through sky.

SP: You had actually been training for this particular swim in the Antarctic for two years. What did you do to get ready for this extremely cold water?

LC: I did things I'd never done before. I became a sprinter instead of training (by) going for five-hour swims. I wound up doing an hour in my folks' backyard pool, swimming head up and waving arms as fast as I could for an hour, basically trying to simulate what I would be doing in Antarctica.

The biggest thing I really needed to do was to learn how to swim more with my head up and at the same time have the power to move through the water.

SP: Now the reason for swimming with a head up is it's just too cold? You lose too much body heat if you have your head in the water?

LC: That's exactly right. You lose up to 80 percent of your heat through your head. You know that being in Wisconsin. And so the idea is that if I could swim head up, I would be able to prolong my ability to stay in the cold.

But at some point, you know, you get tired or because you're pressing your entire body against the water, you're sort of almost swimming it upright. So in order to compensate for that, I had to do a whole lot more weight training.

SP: It's worth pointing out that you are a medical marvel. For some reason, temperatures that would kill a lot of other people don't (harm) you. Scientists have actually tested your body, your physiology. What have they discovered about you?

LC: They've discovered that I am able to close down the circulation to the peripheral area, to the skin, into the fingers and toes and hands and feet really rapidly and keep it closed down.

If you took an untrained person and put them in the cold, you'd have that response initially. And then at some point the body would say "we need to get oxygen out to those tissues." And so the body would start sending surges of blood out there and then bring that cooled blood back to the core.

But my body basically says, "Lose the hands, lose the feet, keep the core warm and keep the brain and lungs and heart going."

SP: OK. So you had your practice swim. You realized you could do that. And now it was time for the real one, for the whole one mile touching land on Antarctica. What happened?

LC: Well, we took the ship down to an area called Paradise Harbor, looking for beaches where I could land.

There are areas that are huge glaciers and that just sort of slide right down to the ocean. And you can't swim near those glaciers because you're afraid of the falling icebergs.

So we kept looking for places where we could land, but there weren't many because the wind had shifted and there the icebergs that sort of accumulated in different areas and a lot of them were the beaches. We searched for probably half the morning until we came to a place in a harbor, this just beautiful area where the beaches maybe 800-yard wide, (looking like) terracotta stone. And there are glaciers on either side of it.

We saw that the weather was fairly calm and decided that it was a good day for a swim.

SP: How difficult was that swim?

LC: Really, really, really, really hard.It was the most difficult thing I've ever done. Mostly because I had done the test swim only a day before and it took a huge amount out of me. And also I had had some nerve damage from that first swim. So I realized that my first line of defense of being able to tell how I was doing on the peripheral area, you know, on the skin level was gone.

But it was also hard because I really didn't like shivering so hard at the end of the first test swim. Your body has to work awfully hard when it's that cold to get warm again. And I think I was working as hard shivering as I had done during that first test swim. And I actually thought, you know what? I swam nine tenths of a mile. Maybe that should count as the Antarctic mile.

And then I thought: I've come this far and this would be short as a goal. And I really should go for the mile. And I really wanted to swim to the continent, not the subcontinent. And so, I think I just decided it was time to do it when the conditions are right and we went forward.

SP: Now, it sounds just miserable. I mean, it's basically a survival test. Can you do it? Is there anything at all enjoyable about this?

LC: It's not miserable and it's not a survival test. I mean, there those are elements in it. But it's also the idea that you are jumping into unknown waters, that you are swimming through water that is so clear that you can see penguins jumping in toward the end of the swim and swimming with you. You can see them swimming through the water and see their water bubbles coming up all around you. And you are sort of in a world that nobody else has really been in in this way before or maybe even wanted to ever do it.

SP: Now, you've said this was your hardest swim that you've ever done, but you've done some pretty hard swims earlier years. I mean, there was one, for instance, down in New Zealand where you after a few hours you actually were further back from where you had started from because the waves were so big.

LC: (I had) been swimming between the north and south islands of New Zealand and there were two storms converging and we weren't aware of it because we didn't have the weather satellite stuff that we have now. And so after five hours of swimming, I was further from the finish than I had started. The current had carried me around the North Island and I was really fighting to go on.

LC: Well, I did go on because I had a school of dolphins who came in and started swimming with me, with the people in the boats. They were all around our boats and the water visibility was about 50 feet. And you could look down and see dolphins swimming around. They would suddenly leap out of the water and then spin and spiral and click and squeak and chatter.

They stayed with me for about an hour. And in that time, I sort of lost the sense of "I can't do this anymore." So I kept going. And periodically throughout the next I don't know how many hours — the swim wound up taking 12 hours and two minutes.

But throughout the swim, the dolphins would come back in moments when I didn't feel like I could go any further. And actually, toward the end of the swim, they wound up guiding us right into an area where I could land on shore.