The Pauses Between Chords of Iconic Rock and Roll 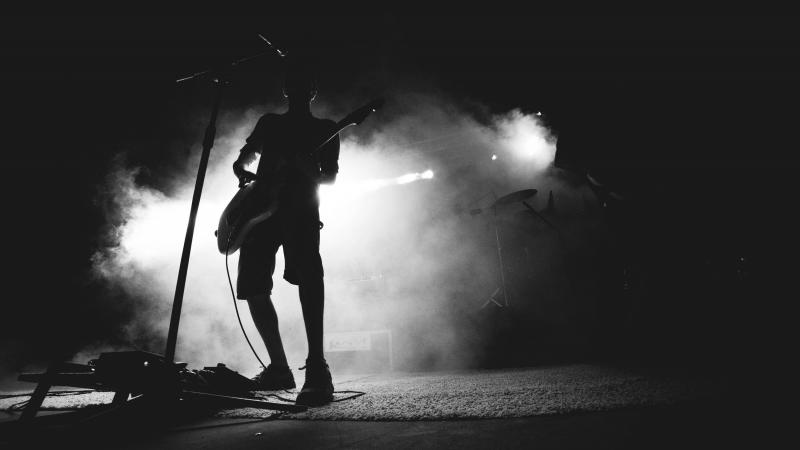 Every composer knows that you don't just write music with notes. You also write with silence. Literally. There's that little squiggly symbol for it called the rest. Well Jennifer Egan might have been thinking about that when she wrote her Pulitzer Prize winning novel "A Visit From the Goon Squad." The book includes a chapter formatted as a PowerPoint presentation, which allowed for a uniquely modern literary device for delivering pauses

This essay was adapted from a transcript and lightly edited for clarity.

I realized that what had really been driving me to it the whole time is that PowerPoint as a form is built around the same kind of structure that "Goon Squad" is, in the sense that it consists of isolated moments with pauses in between them. That's what PowerPoint is. It allowed me to reveal the structural idea behind the book right there.

Pauses are a big part of our perception of time — it's often when we have a sense of time briefly stopping that we are aware of its passage, and I had gotten very interested in pauses in songs because they function similarly. Well, the best milieu in which to explore all of that was a form like PowerPoint, which is built around a counterpoint between moments and pauses. So it really ended up serving me well in that particular case, I think.

[My character obsessed with “the great rock ‘n’ roll pauses”] was another case where I wasn't quite sure why it interested me so much. I had encountered it in a book that I had read doing research on the music industry called "So You Want To Be a Rock ‘n’ Roll Star" by a drummer named Jake Slichter who was with the band Semisonic.

They made a huge hit in 1998 called "Closing Time" that I think most people would recognize him, and there's a pause in that song. There's a pause and you think maybe the song has ended. But then the song continues and you're relieved, but then you also know that the song will actually end.

Slichter talks about how that pause came to be in the recording of the song. There was a particular producer involved — Bob Clearmountain — who's known for inserting pauses in songs. And in fact they are called "Clearmountain pauses.”

That idea just caught in my mind and I was dying to somehow use pauses in the book, but I couldn't find the right way. I had an academic at one point who was writing a book about pauses in songs. But that particular piece never quite worked. But I think the reason I was so obsessed with it actually was exactly the same thing that led me to the PowerPoint, so it was perfect that they all converge, which was that pauses make us know that time is passing and in a certain way that's a metaphor for the way we perceive time in our lives.

Just letting time unfold in a more real time way, which is what Proust did, didn't feel right. First of all, it would just be literally mimicking him, but also it didn't quite feel of this moment. I think we live in a moment that's full of gaps and shortcuts and a sense of speeding up, a sense of acceleration. And then moments when that acceleration seems to stop. We live in a moment that feels kind of herky-jerky to me. And I guess I just wanted to capture a sense of that, and to suggest a whole epic sweep but through the refraction of little parts rather than one huge monster of a whole.