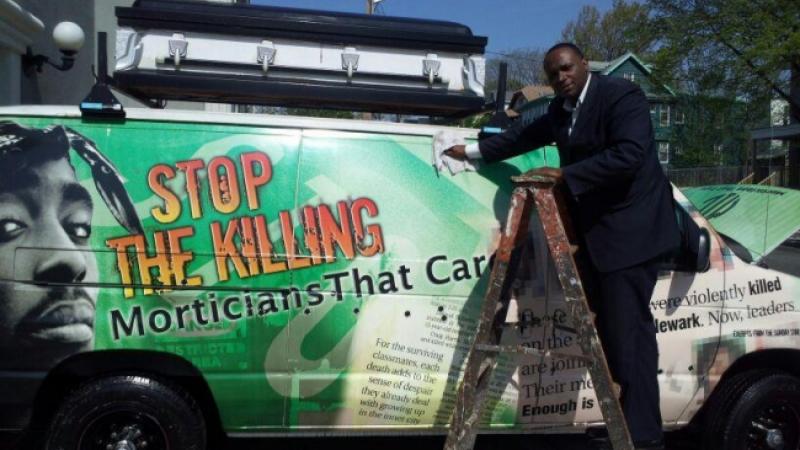 It’s a typical Friday afternoon in Newark. Young men mill around the chicken shack and liquor store at the corner of South 15th Avenue and South 10th Street. Just a typical day, until Muhammad the Mortician’s van pulls up.

Tyrone Muhammad is not your average mortician, working quietly in his funeral home. Instead, he’s taking his work and his message back out into his community.

Muhammad says there’s an epidemic in Newark — and in America as a whole — of black men killing other black men. Every day he sees the results of it at his work. And he wants the violence to end.

So every so often Muhammad loads photos of the bodies he’s worked on into his van and takes them into the streets. The families give him permission because they also hope that showing people what bullet holes and shattered skulls look like — what death actually is — will help curb the violence.

He wrote recently on Facebook, “Tired of embalming so many young people its sickening. I wish you all could see my world.” In an interview with Charles Monroe-Kane, he discusses the world of preparing bodies for display:

Most people see when they come into the funeral home the deceased person looking serene and very peaceful. But that’s really just an illusion, because before we put them in the casket they’re riddled with bullet holes. People need to see that when these young men come into our funeral home, who have actually been murdered, they come in there with bullet holes; their heads is almost shot off. Our job is to give their family a lasting memory of them.

So, they need to see what we see. They need to see when the holes need to be patched up with that cold cream and that mortuary wax, and that hot heat that I take from a stove that a woman would use to do their hair, as I melt the makeup and put that on there to cover up them bullet wounds. And how we plaster their head back together and do reconstruction on their faces. And to really look into the eyes of the deceased because a lot of these young brothers, particularly black men that I see on a continuous basis, their eyes tell the story. A lot of them was afraid because when they get murdered oftentimes they get stuck and locked and they’re frozen into the death look. And you can actually interpret what they was seeing prior to them being murdered.

So, when you see what I see — and I’m overwhelmed and passionate about this platform — I shed tears most of the time.

Tyrone Muhammad, known as Muhammad the Mortician, is the funeral director at Peace and Glory Home for Funerals in Newark, New Jersey. You can see more from Muhammad on his Facebook page [Warning: some of the content is graphic].