Listener Ghost Story: 'You Are What You Eat' 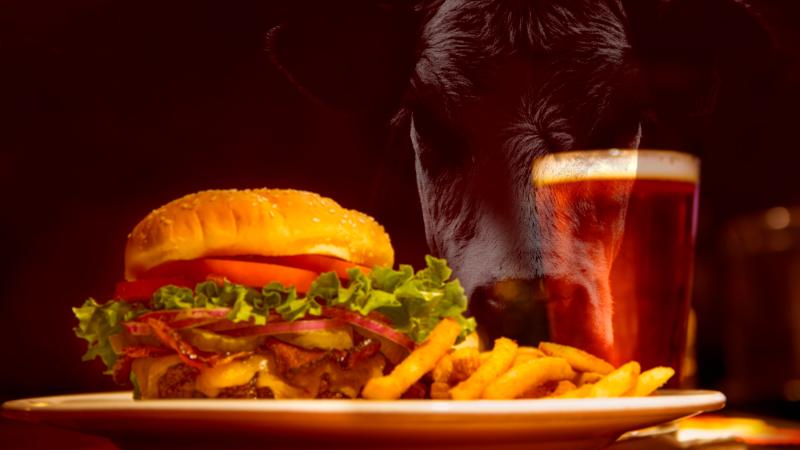 Listener Jonathan Blyth from Bloomer, Wisconsin sent us a ghost story that might make you think twice about what — or whom — is on your plate. The text has been lightly edited for clarity.

You Are What You Eat

I'm haunted by the food I eat. How lame is that?

I didn't understand last year why my apartment was slowly accumulating spectral barnyard animals. Phantom pigs rooting in my living room, ghostly chickens foraging in the carpet — seriously, ghostly chickens. There's a flock of them roosting in the laundry room now.

I can't describe the feeling of seeing these hundreds of animals milling around my place, knowing I've eaten every one of them. It's not that they're spooky, exactly, just that there's so many of them. I was lucky to be standing by the sink when a spectral squid flailed its tentacles out of the six quart pot in which I was boiling rigatoni for dinner — with meatballs. The cow will probably turn up one of these days.

Of course, the first time a bear lumbered through the kitchen, I just about wet myself. When did I ever eat a bear? Then I remembered that super yummy homemade pepper sausage my neighbor Randall makes from wild game he hunts. Who knows what all goes in there?

Anyway, that's how it is now. They're just part of my life, like memories, but more vivid. I could go on about the herds of cattle or the clams crusting the toilet bowl. But the real reason why I'm now strictly a vegetarian is this: Three days ago, a girl showed up.

Sixteen maybe. Pretty, with short brown pixie hair. The second I saw her, my mind reeled and I started to feel cold. My stomach began churning. She just looked at me — not angry, at least not at me, just serious — and said nothing. Neither do the tall black woman and boy of around 10 who arrived yesterday morning.

I don't know where they came from, but I can guess. I just hope it wasn't the pepper sausage. Because it was really good, know what I mean? I liked it.