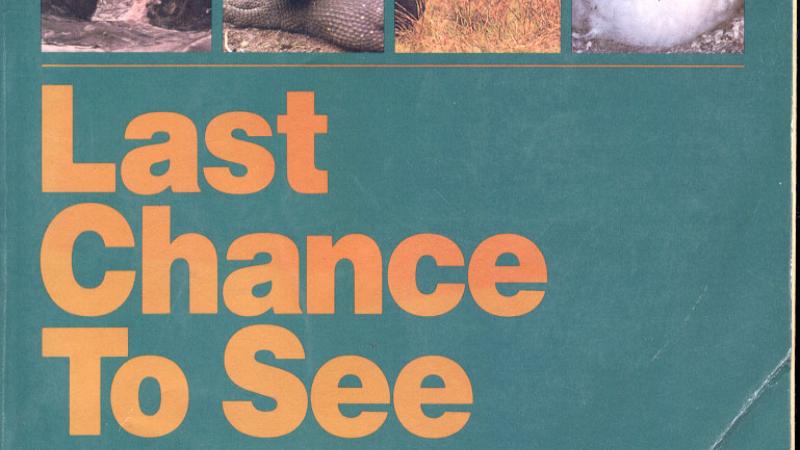 My name is Jennifer Jacquet. I'm an assistant professor at NYU's Department of Environmental Studies and I'm the author of "Is Shame Necessary?: New Uses For An Old Tool.

I want to recommend today a book published by Douglas Adams and Mark Howard Dean in 1990 called "Last Chance to See."

Mark Howard Dean is a zoologist with the World Wildlife Fund and Douglas Adams is our old friend who wrote "Hitchhiker's Guide To The Galaxy" and is best known for his science fiction but actually wound up writing this fabulous book about seeing some of the world's most endangered animals. The book is part travelogue, part natural history, and partly a treatise on the extinction crisis. He travels all over the world to Indonesia and New Zealand and Zaire — which is now called the Congo—and even China looking at the rarest species in the world.

The best part about Douglas Adams is that he really never addresses anything head on. He tackles this really sad problem that we're faced with — which is the high rate of extinction — in this really beautiful and funny way that makes you in the end realize that he's sort of as depressed as you are about the whole thing, but refuses to sort of let it get him totally down.

So here's the part where he's about to visit the gorillas:

"The gorillas were not the animals we had come to Zaire to look for. It's very hard however to come all the way to Zaire and not go and see them. I was going to say that this is because they are our closest living relatives. I'm not sure that's an appropriate reason. Generally, in my experience, when you visit a country in which you have any relatives living. There's a tendency to want to lie low and hope they don't find out you're in town. At least with the gorillas you know that there's no danger of having to go out to dinner with them and catch up on a million years of family history. So you can visit them with impunity."

I love lines like that. Unfortunately, since he wrote the book, the Yangtze River dolphin in which he does feature has been declared extinct. When he wrote the book in 1989, when he was on the trip there were 22 northern white rhinos. And today there are only five and they're all live in captivity. So it really was his last chance to see.

I am really interested in the idea of survivor guilt but at a sort of species level and that's something I myself really grapple with feeling like humans are causing the extinction of so many animals and we're going to survive and they're not. And I really look for writers who feel this way too. And this book by far really got to that point. It's one of the best treatments of what I would describe as survivor guilt there is.