How To Listen To An Earthquake 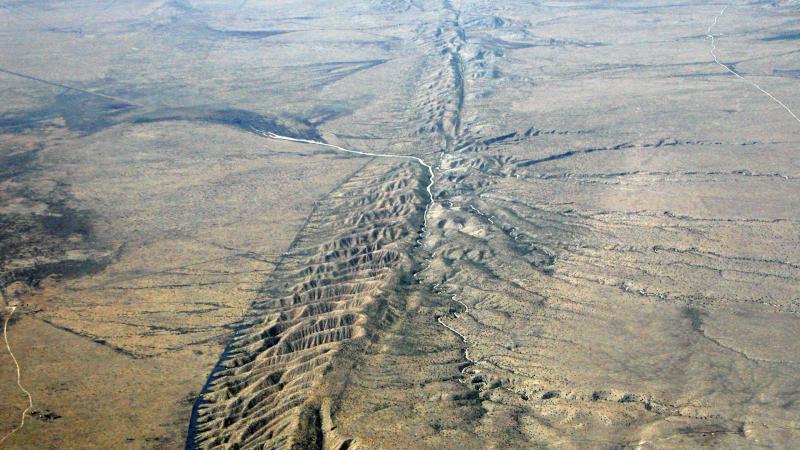 We tend to think about earthquakes in terms of their destructive aftermath, but we have a pretty limited picture of what an earthquake looks like here on the Earth's surface.

As the Earth shakes at the surface, seismic waves are pulsing through the layers of Earth below, invisible to human eyes and ears but observable as sound waves. Sound waves that can be recorded, even monitored, to provide advance warning of a coming seismic event.

Ben Holtzman is a geophysicist who has been collecting sound recordings of earthquakes for years. He examines those sounds as a research professor for the Lamont Doherty Earth Observatory at Columbia University.

With help from musician Jason Candler and many other collaborators, Holtzman has developed SeismoDome, a show at the Hayden Planetarium at the American Museum of Natural History that uses those sounds and visualizations based on them to explain the deeper story of how seismic waves move across the planet.

Speaking to Charles Monroe-Kane for "To the Best of Our Knowledge," Holtzman explained how our understanding of seismic activity has evolved over the decades, and how recording the sound of different kinds of seismic waves has helped us not only understand earthquakes better, but have been instrumental in improved early-warning systems.

On May 6, 1976, a person in Friuli, Italy, was recording Pink Floyd's "Shine on You Crazy Diamond" from their 1975 album "Wish You Were Here" when an earthquake hit. The Terremoto del Friuli earthquake had a magnitude of 6.5 on the Richter scale. In the earthquake, 978 people were killed, 2,400 were injured, and 157,000 were left homeless.

There is a 20-second delay in the recording from the LP’s needle picking up sounds to human beings reacting to the earthquake’s movement.

Holtzman said the needle is picking up on sounds that come before an earthquake hits.

Within the recording, Holtzman said we're hearing the effects of two types of seismic waves in sequence.

"They are the fastest traveling, but they are very small," Holtzman said. "These are what dogs pick up and freak out on before humans do. The P-wave arrives and the needle jumps."

Next are S-waves, secondary vibrations felt in the seconds following the P-wave.

"You hear a scratch, and that’s the S-wave arriving, and then the rumble happens, and then you hear people starting to yell," he said.

On March 11, 2011, an earthquake hit the Tohoku region of Japan. With a magnitude of 9.1 on the Richter scale, it was one of the largest ever recorded, killing over 28,000 people. The resulting tsunami caused the Fukushima nuclear power plant meltdown, the second largest nuclear disaster in history.

This was recorded at the surface near the epicenter of the earthquake.

The Japanese have a seismometer system that allows them to detect the P-waves of an earthquake 20 seconds before it hits — a system built on what seismologists have learned about seismic waves from recordings like the Fruili recording audio.

"Twenty seconds is enough time to send out an alarm to get people out of their houses, or out of buildings, or under a table," Holtzman said. "And even enough time to slow (high-speed) trains down."

Generally, Americans tend to associate California with its earthquakes, going back as far as the 1906 earthquake that hit San Francisco, the deadliest earthquake in American history. Holtzman and his team captured the sound of each Californian earthquake from 2001 to 2007. The louder the sound, the larger magnitude.

But as Holtzman points out, "compared to other fault lines in Sumatra, the Caribbean, and in Japan, California is relatively quiet."

The giant 2004 Sumatra earthquake, the Sumatra–Andaman earthquake, magnitude 9.2 on the Richter scale, ruptured the greatest fault length of any recorded earthquake, spanning a distance of 900 miles — longer than the state of California. Along with the subsequent tsunami, the earthquake had a devastating effect, destroying countless buildings and killing over 225,000 people in 14 countries.

This earthquake was the third-largest ever recorded, and one of the worst natural disasters ever recorded. The magnitude sent shock waves around the planet, even triggering a smaller earthquake in Alaska.

Holtzman recorded the sound waves of the earthquake traveling around the globe. Here's what it sounded like one week after the initial earthquake.

And here's what it sounded like seven weeks after the earthquake.

Holtzman said one of the most surprising earthquake sounds he's ever heard are from a recent cluster in Oklahoma.

What makes these sounds so unique is they are human-made — they come from earthquakes triggered by a byproduct of fracking. Once the natural gas is extracted from the ground, the fracking process produces a wastewater that is usually removed from the drilling site. In Oklahoma, however, natural gas producers are allowed to put that wastewater back into the ground via high pressure, injected into underground rock formations left behind by oil drilling.

Filling these formations with wastewater is having adverse effects on old faults. Holtzman said this creates "stresses that people did not know were there."

The stresses are released in the form of new, unusual earthquakes.