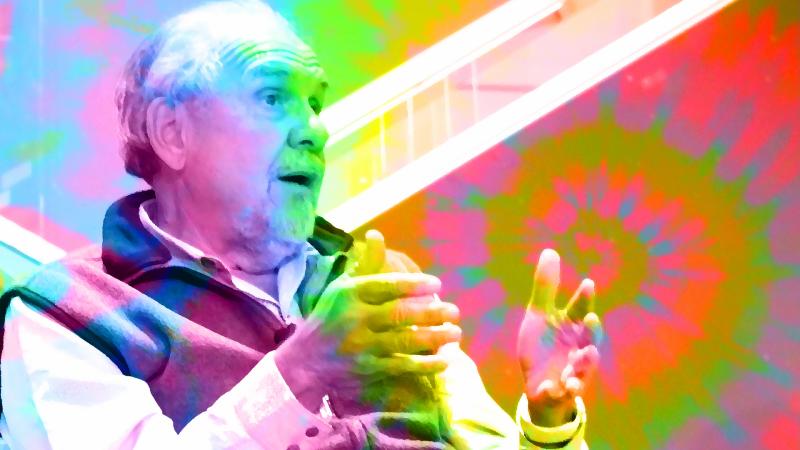 In the rush to find trustworthy medical experts to talk about the current coronavirus pandemic, one name has stood out in the media blitz: Larry Brilliant, an epidemiologist and chairman of the board of Ending Pandemics, an organization that works to "capture early signals of diseases in animals and humans to prevent spread, protect livelihoods and save lives."

Brilliant was the doctor who helped lead the United Nations campaign that eradicated smallpox, and for years he’s been warning about another pandemic that could kill millions of people. He was also the senior science advisor to the blockbuster movie "Contagion."

What’s not widely known is Brilliant’s remarkable backstory. To say he was an unlikely candidate to lead a global campaign against smallpox is an understatement.

In the 1960s, Brilliant was a young doctor caught up in the wave of political activism and then the Summer of Love in San Francisco.

"It really wasn’t fair to a young boy from Detroit, Michigan," he chuckled, speaking to "To the Best of Our Knowledge" about his memoir, "Simply Brilliant" in 2016. "It was like opening up a candy box to a kid. And it wasn’t just sex, drugs and rock 'n' roll. This was the beginning of the Age of Aquarius."

Brilliant became friends with many 1960s icons, including Ken Kesey and the Merry Pranksters; Timothy Leary, the apostle of LSD; and Richard Alpert, who later became the spiritual teacher Ram Dass.

Brilliant and his wife, Elaine, joined the clown prince of the counterculture, Wavy Gravy, on the Hog Farm bus that traveled across Europe to Bangladesh, India and Kathmandu to give away food and medical supplies to people in need.

Eventually, following Wavy Gravy and her intense interest in Eastern spirituality, Elaine moved to an ashram in India while Brilliant returned to the United States to practice medicine. After some cajoling, she persuaded Larry to visit the ashram, presided over by Neem Karoli Baba, the guru known to his followers as Maharaj-Ji.

It was a rough landing once Brilliant arrived. He was seeking enlightenment but instead felt lonely and miserable.

"These young Americans were touching this old man's feet," he said. "I thought my wife had been captured by a cult."

At that point, their marriage was on the verge of collapse.

"I had my own dark night of the soul, except it was during the day," he recalled. "I went out on a lake near the ashram and started thinking about God. I recited every prayer that I'd ever learned. I was trying to get a sign that it was the right place for me to stay, but I got nothing back."

The couple agreed to split, crying and hugging as he packed his bags. She persuaded him to see Neem Karoli Baba before he left, so he went to the ashram. The villagers had written "Rama," the name for God, on an altar made of apples, oranges and flower petals. When one of the apples fell, he picked it up, and at that moment Neem Karoli Baba burst out of his room, stepped on his hand, pinning him to the floor and started asking questions.

"He says to me, 'What were you doing at the lake?' Up until now, he'd only spoken in Hindi, but "lake" he said in English, and I felt a kind of shudder in my back — something weird was going on," Brilliant said. "'Oh, yes, you were talking to God. Did you ask for a sign?' He said that in English. I mean, I’m a scientist. There was nothing in my rational mind that could explain how he knew I did that. I hadn’t told anyone."

Everything changed at that moment.

Neem Karoli Baba starting calling him "Dr. America," and Brilliant stayed at the ashram. His guru then had an utterly improbable prophecy: he said Brilliant would join the UN on a campaign to eradicate smallpox.

Brilliant had never worked in epidemiology or public health, and India had no campaign against smallpox, even though 200,000 children in the country had smallpox. Regardless, his guru was telling him to take the 17-hour trip — by train, bus and rickshaw — to the nearest UN office in India to offer his services, which he did in his ashram robes, with a beard hanging down to the middle of his belly. He was turned away the first time — and then the next dozen times.

"It was really weird. It was humiliating. And I lost faith any number of times," Brilliant said. "Then one day, he said, 'You’ve got to go this very second. Go, go, go. And I really didn't want to go, but I did. I walked into the office and there was another American there — one who had come from Geneva to propose starting a smallpox program in India."

Brilliant got a spot on the team, and his UN group launched the campaign against smallpox in India.

Over the next few years he helped lead a team of 150,000 people from 170 countries — including Russia and the U.S., despite it being the height of the Cold War — to work together to wipe out the last traces of the deadly disease.

"I had the privilege of seeing the last case of smallpox," Brilliant said. "A young girl named Rahima Banu had completed smallpox in October of 1975 and did not die. That was the last case in an unbroken chain of transmission of killer smallpox that went all the way back to Pharaoh Ramses and beyond, probably 10,000 years."

This story was originally published on TTBOOK.org.