'All writing is political': Author Bernardine Evaristo on tenacity, growing up Black and British, and winning the Booker Prize 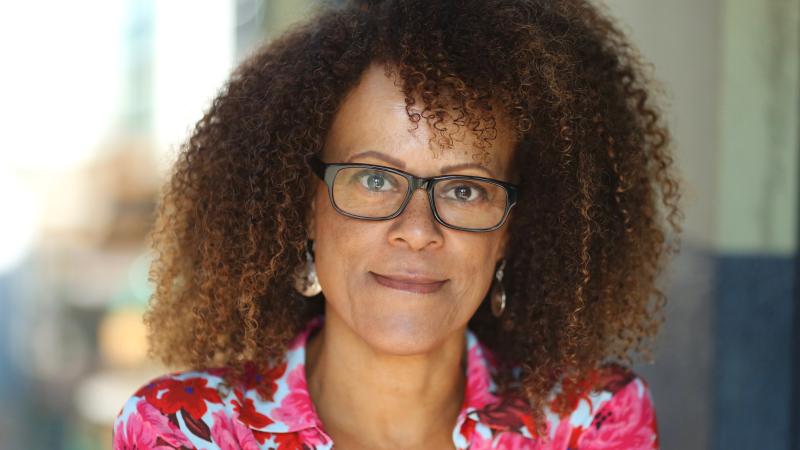 Bernardine Evaristo is the first Black woman to win the Booker Prize for her novel "Girl, Woman, Other." She has a new memoir out, "Manifesto: On Never Giving Up."

She’s also an activist and is working to make sure unknown and underrepresented Black British writers find an audience. In a conversation for "To the Best of Our Knowledge," I talked with Evaristo about her inspirations and how she lives in her imagination.

Shannon Henry Kleiber: I love your confidence in your memoir and your life. So many artists second-guess themselves and take rejection and sock it away, but you have such a joyful tenacity. Where does that come from?

Bernardine Evaristo: I was born into a tenacious family. I come from a mixed marriage. My father was Nigerian, my mother English, and they married in the 1950s in the face of huge social and family disapproval, especially on my mother's side of the family. And yet they loved each other. So they were going to get married, and they had eight children in 10 years. They were people who followed their hearts and led the life that they wanted to lead.

SHK: Your parents became activists. Did that influence you in your activism?

BE: I think yes, definitely. They were left-wing socialists and very active in the trade unions where they worked. My father was a local political figure in the area. Political conversations were had around our table.

Also, when you're growing up in a racist society, and you're a person of color, I think you do have a choice as to whether you're going to be somebody who fights against that, or whether you're going to be somebody who just gets on with your life and tries to keep your head above water and not put your head above the parapet. And you know, my parents are people who put their heads above the parapet.

As soon as I was able, when I went to drama school — a very political drama school — I, too, did that. I became somebody who was prepared to stand up for what I believed in, which at that time was around race and feminism.

SHK: Your novel, "Girl, Woman, Other" is so innovative in form and art and punctuation and groundbreaking in many ways. It has 12 characters, 11 women and one non-binary character. How do you describe the book?

BE: I call it "fusion fiction" in terms of the form of it, because of the way it fuses different stories together, and the way I've used the language on the page. It is a book that is, in a way, an ode to Black British women. It's a book that travels over 100 years, well over 100 years. So it’s like a tapestry.

SHK: And then it won the Booker Prize in 2019. You have said you weren’t an overnight success, obviously, but that everything changed overnight. So what changed?

"Girl, Woman, Other" sold over a million copies in the English language alone, compared to the sales of my previous books that were often critical successes, but they simply did not sell beyond a few thousand. The reach of my work has just exploded. The image of me as a writer literally changed overnight, and suddenly I was considered a heavyweight. And it's not that anybody thought I was a lightweight before, but I was often not included in the way that I wanted to be, in terms of the literary culture here. And also, I have a huge platform now that I didn't have before, as an activist.

SHK: There’s a long tradition of political writers, from Aristotle to Ray Bradbury to Margaret Atwood, and their work as a form of activism and social conscience. And a part of history. How do you see your place in this part of ongoing history?

So I'm very aware that I'm making history — not in the egotistical sense of, you know, 'I'm so famous, I'm going to make history' — but that I am rewriting history. Re-imagining history through my work, but also as a writer doing what I do. I am also counteracting invisibility.

SHK: Do you remember the first time you thought of writing as a political act?

BE: The first poem I ever wrote was a poem about the suffragettes. I was about 14, so it was about 1974. It was in a school magazine. I went back to my old school last year, and they dug it out of the archives and gave me a copy, and it was just wonderful to see it.

I thought, 'My God, Bernardine, you thought you became a feminist when you went to drama school. But this is such a feminist poem.'

And so that was it. Back then, when I was 14, I was already a political writer.

SHK: Is being a political writer different now than being one in previous generations?

BE: The first thing to say is that all writing is political. Somebody like Margaret Atwood grapples with the really big issues of the day and imagines our society in ways that are really dystopian.

When I go back to the writers who inspired me when I was a young woman — Toni Morrison, Alice Walker, Michelle Cliff, Audre Lorde — they're very political writers in America writing Black women's stories into being. And they were the first generation to do that in great numbers, actually anywhere in the world.

BE: The project's called Black Britain Writing Back, and the idea is to bring back writers that were overlooked or have disappeared from view, going back over a hundred years.

I think the two books that are standout books are "Growing Out Black Hair and Black Pride in the Swinging 60s" written by Barbara Blake Hannah, which is an absolutely fantastic memoir about her time living in London in the 1960s. She's a Jamaican woman. She was here for about two decades. She became Britain's first Black reporter during that time. She had two jobs on television, and she lost both jobs because racists objected to her appearing on their screens, and they campaigned against her. The television bosses got rid of her, and she went back to Jamaica and became a Rastafarian. And it's a beautiful book. Her writing is just so dynamic and alive.

And there's also "A Black Boy at Eton" by Dillibe Onyeama, who was the first Nigerian, the first Black person to graduate from Eton College, which is the most elite school in this country. It's probably the most famous school in the world, and he was a student there in the '60s. He wrote a memoir about his time there that was published in 1972. It is brilliantly written, but also really shocking in terms of the racism he experienced at this super elite school. The headmaster of Eton banished him from ever darkening their doors again, and the book was kind of trashed by the media. Eventually, he went back to Nigeria.

What I find so interesting about his book is that Eton College has produced 20 British prime ministers, including a current one, so it is really the seat of the establishment in this country. It is the hothouse of the elites in this country. And when you read about his treatment as a Nigerian boy at that school at that time, it really makes you reflect seriously on the nature of the people who then went on to run this country in all the most important fields, in the last 50 years or so, because they were the boys he was at school with.

SHK: How do you keep going? You say you're stubborn, and it comes through in your memoir that you are not going to give up, but you're experiencing throughout your life racism and ageism and misogyny. Is that what keeps you going, or what keeps you going?

BE: Actually, what keeps me going is I love what I do. That's a really good incentive, isn't it? I love creativity. I've led a creative life all my life. I love writing. Yes, sometimes it's frustrating and a bit struggling, and it might not work out for a while, but essentially, I love it. I don't know how I would function if I didn't have creative self-expression in my life through my writing and creating other worlds and other people's other stories.

Most of all, I'm writing about these other imagined lives. I live in my imagination. And it's a wonderful place to be. It's very liberating and exciting and adventurous. Yes, there are always obstacles and definitely obstacles in my past. When I finish my books, I don't always think they're great, but there is such a degree of satisfaction that they are what they are. I hope they do well out there in the world — I know I've put everything into them, and it's exciting.

Being a writer for me is so exciting. It's a gorgeous job. That keeps me going.