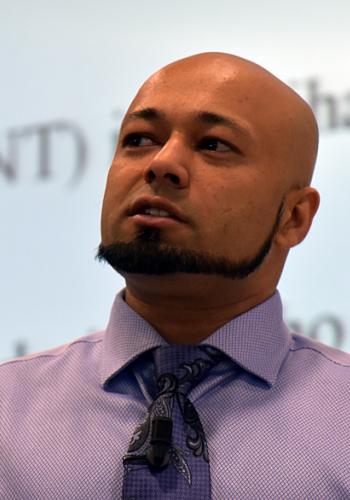 Born and raised in Canada, Mubin Shaikh grew up with two conflicting and competing cultures. At the age of 19, he went to India and Pakistan where he had a chance encounter with the Taliban prior to their takeover of Afghanistan in 1995. Mubin became fully radicalized as a supporter of the global Jihadist culture, recruiting others and establishing his network in the extremist milieu. The 9/11 attacks forced to him reconsider his views and he then spent 2 years in Syria, augmenting his private study of Arabic and Islamic Studies, where he would go through a period of full deradicalization.

Returning to Canada in 2004, he became a undercover operator with the Canadian Security Intelligence Service and worked several CLASSIFIED investigations. In late 2005, one of those files moved to the Royal Canadian Mounted Police, Integrated National Security Enforcement Team (INSET) and Mubin traversed to what came to be known as the “Toronto 18” terrorism case resulting in the conviction of 11 aspiring violent extremists.

He has since obtained a Master of Policing, Intelligence and Counter Terrorism (MPICT), is now a PhD candidate in Psychological Sciences studying radicalization, deradicalization and violent extremism at the University of Liverpool, Tactical Decision Making Research Group. Mr. Shaikh is considered a SME (Subject Matter Expert) in radicalization, violent extremism and Countering Violent Extremism (CVE) to: United Nations Center for Counter Terrorism, Interpol, Europol, Hedayah Center, U.S. Department of State – Center for Strategic Counterterrorism Communications, National Counterterrorism Center, U.S. DOD Strategic Multilayer Assessment Team, U.S. Central Command – Special Operations Command (as an expert on ISIS), NATO and many others. He has appeared on multiple U.S., British and Canadian media outlets as a commentator and is extensively involved with the ISIS Social Media and Foreign Fighter file. He is also co-author of the acclaimed book, Undercover Jihadi.