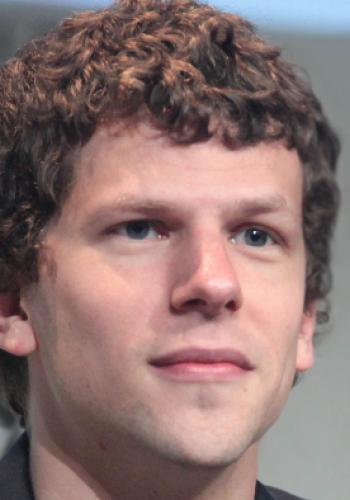 Jesse Adam Eisenberg (born October 5, 1983) is an American actor, playwright, author, and humorist. He made his television debut with the short-lived comedy-drama series Get Real (1999–2000). Following his first leading role in the comedy-drama film Roger Dodger (2002), he appeared in the drama film The Emperor's Club (2002), the psychological thriller The Village (2004), the comedy-drama The Squid and the Whale (2005), the dark comedy The Living Wake (2007) and the drama The Education of Charlie Banks (2007). In 2007, Eisenberg won the Vail Film Festival Rising Star Award for his role as Mills Joaquin in The Living Wake.[1]

In 2009, he starred in the comedy-drama Adventureland and the horror comedy Zombieland, which earned Eisenberg critical acclaim. He then played Facebookfounder Mark Zuckerberg in The Social Network (2010), for which he received BAFTA Award, Golden Globe, and Academy Award nominations in the Best Actorcategory. He also starred in Holy Rollers (2010), which was nominated for the Grand Jury Prize at the 2010 Sundance Film Festival. In October 2011, Eisenberg made his playwriting debut Off-Broadway in Rattlestick Playwrights Theater's production of Asuncion, presented at Cherry Lane Theatre.

Since then, he has gone on to voice the main character, Blu, a male Spix's macaw, in the animated films Rio (2011) and Rio 2 (2014), and starred in the action-comedy 30 Minutes or Less (2011) and the magician caper film Now You See Me (2013). He re-teamed with Kristen Stewart for the action-comedy film American Ultra (2015), and will portray Superman's archenemy and heir to the LexCorp fortune, Alexander "Lex" Luthor, Jr, opposite Henry Cavill, Ben Affleck, and Gal Gadotin Batman v Superman: Dawn of Justice, slated for a March 2016 release.[2][3]

Eisenberg has contributed pieces to The New Yorker and McSweeney's magazines.[4] He has written and starred in three plays for the New York stage (as of 2015):Asuncion, The Revisionist, and The Spoils.[5] The most recent of his plays, The Spoils, directed by Scott Elliott and also starring Kunal Nayyar, Michael Zegen, Erin Darke, and Annapurna Sriram, was the winner of The Blanche and Irving Laurie Foundation Theatre Visions Fund Award.[6]

On September 8, 2015,[7] Eisenberg's first book, Bream Gives Me Hiccups, a collection of short humor pieces,[8] was released and has received generally positive reviews.[9]