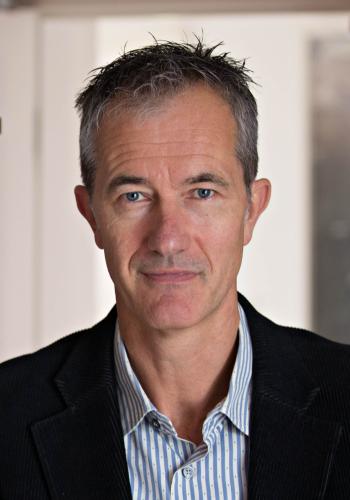 Geoff is the author of four novels: Paris Trance, The Search, The Colour of Memory, and Jeff in Venice, Death in Varanasi; a critical study of John Berger, Ways of Telling; two collections of essays, Anglo-English Attitudes and Working the Room; and many genre-defying books: But Beautiful, The Missing of the Somme, Out of Sheer Rage, Yoga For People Who Can’t Be Bothered To Do It, The Ongoing Moment, Zona, about Andrei Tarkovsky’s film Stalker, and Another Great Day at Sea: Life Aboard the USS George H W Bush.

A collection of essays from the last twenty years entitled Otherwise Known as the Human Condition was published in the US in April 2011 and won the National Book Critics Circle Award for Criticism.

His most recent book, White Sands: Experiences from the Outside World, was published in May 2016 (Pantheon, US; Canongate, UK). A new book, The Street Philosophy of Garry Winogrand, will be published in early 2018 by University of Texas Press. In the fall of 2018 “Broadsword Calling Danny Boy”, about the film Where Eagles Dare, will be published in the UK by Penguin and in the US by Pantheon.