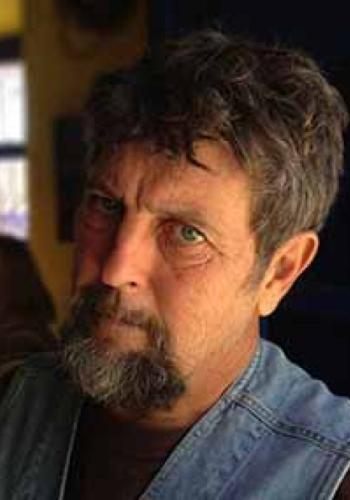 Gary Paul Nabhan (born 1952) is an Agricultural Ecologist, Ethnobotanist, Ecumenical Franciscan Brother, and author whose work has focused primarily on the interaction of biodiversity and cultural diversity of the arid binational Southwest. He is considered a pioneer in the local food movement and the heirloom seed saving movement.

A first-generation Lebanese American, Nabhan was raised in Gary, Indiana. While excelling in some of his studies, he dropped out of high school, and then had the opportunity to attend Cornell College in Mt. Vernon, Iowa for 18 months. During that time, he worked at the headquarters for the first Earth Day for two stints in Washington DC.

He then transferred to Prescott College in Arizona, earning a B.A. in Environmental Biology in 1974, and has remained in-state ever since. He has an M.S. in plant sciences (horticulture) from the University of Arizona (1978), and a Ph.D. in the interdisciplinary arid lands resource sciences also at the University of Arizona (“Papago Fields: Arid Lands Ethnobotany and Agricultural Ecology”, 1983). During this time he started working with, and learning from farmers and foragers in several indigenous communities on both sides of the U.S./Mexico border.

He co-founded Native Seeds/SEARCH while working at the University of Arizona, with both organizations co-hosting the first-ever national conference on community-based seed banks and heirloom seed saving. Native Seeds is a non-profit conservation organization which works to preserve place-based Southwestern agricultural plants as well as knowledge of their uses (1982-1993). He then served as director of conservation, research and collections at both the Desert Botanical Garden (1986-1993) and Arizona-Sonora Desert Museum (1993-2000), where he did the research to help Secretary Bruce Babbitt create Ironwood Forest National Monument.

He then became founding director of the Center for Sustainable Environments at Northern Arizona University in Flagstaff, AZ (2000-2008). In 2008 he moved back south to Tucson and joined the University of Arizona faculty as a research social scientist with the Southwest Center, where he now serves as the Kellogg Endowed Chair in Southwestern Borderlands Food and Water Security. There, he founded the Center for Regional Food Studies and catalyzed the initiative to have UNESCO designate Tucson as the first City of Gastronomy in the U.S.

He is currently married to cultural ecologist and indigenous health activist Laurie Monti (formerly of the Christensen Fund and four universities) and lives in Patagonia, Arizona on a five-acre homestead to the southwest of Tucson. He farms a diverse set of heirloom fruit and nut varieties from the Spanish Mission era and from the Middle Eastern homelands of his Lebanese ancestors, as well as heritage grains and beans adapted to arid climates.