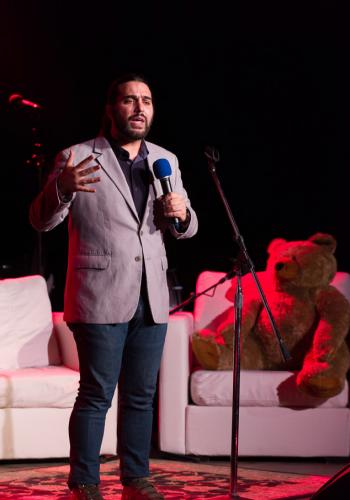 Originally from Ecuador, Esteban Touma is a comedian, writer, teacher, and a conditional permanent resident of the United States who is considering applying for citizenship, so everything he says or writes might be monitored by the Department of Homeland Security.

Esteban has been performing comedy all over the Midwest and in his home country, Ecuador. He LOVES the United States and freedom. He has opened for nationally recognized comedians such as Greg Fitzsimmons, Carl Labove and Wyatt Cenac. He supports American pie in 3 different formats: song, movie, and dessert.

Some of his comedy comes from the perspective of a part Palestinian/part Latino living in the United States. However, he would never dare to openly criticize or otherwise engage in political activities that may compromise the values of his host country, and thus risk delays, processing fees, or even deportation.

He was a finalist in Madison’s Funniest Comic 2016, he is the host of The Moth StorySLAM, an open-mic storytelling competition held in 25 cities all around the world, and he has earned both a tourist and student visa before getting a Green Card by a good faith marriage.

The U.S. Government has officially declared that he’s an “authorized legal alien with a reentry permit.”