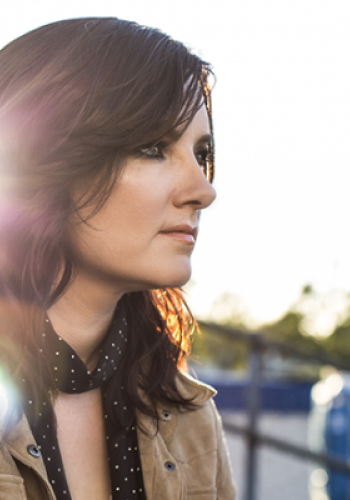 "Ain't we all the stars playing the leading part in our own soap opera?" Brandy Clark belts out that question to kick off Big Day in a Small Town, positing the premise of not just the opening track ("Soap Opera"), but all 10 songs that follow it. The towns that anchor Clark's new album may be small enough to warrant only a single blinking light, but the lives lived in them are anything but... and neither are the hopes and dreams that rise from their backroads and bedrooms.

When you grow up in a small town, oftentimes, your dreams are all you have. Whether it's to become a football star or a father, a homecoming queen or a hairdresser, your dreams might be the only thing that keep you going. For Clark, the dream she harbored in her small hometown of Morton, Washington, was to be a country singer. Sure, once she moved to Nashville, she had successful cuts as a songwriter [The Band Perry's "Better Dig Two," Miranda Lambert's "Mama's Broken Heart," and Kacey Musgraves' "Follow Your Arrow" which won the CMA Song of the Year Award in 2014], but being an artist in her own right was a dream she had stopped dreaming until three years ago when her first album, the stunning 12 Stories, debuted.

At the time, it was a passion project, more than anything... a passion project that went on to become a GRAMMY- and CMA-nominated release that topped a myriad of "Best Albums of 2013" lists; earn her opening slots on tours with Eric Church, Jennifer Nettles, and Alan Jackson; land her performances on The Ellen DeGeneres Show , Good Morning America, The Late Show with David Letterman, and a much-talked about collaboration with Dwight Yoakam on the 2015 GRAMMY Awards in recognition of her nomination in the all-genre Best New Artist category; and win her a Warner Bros. Records deal. Now, as she gears up for her sophomore set, the alternately feisty and poignant Big Day in a Small Town, Clark has much higher hopes.

"When I made 12 Stories, I think my dreams were a lot more realistic, in that I didn't expect a lot to happen... then it did," she says. "This time, my dreams are very much what they were when I was going to Vince Gill and Patty Loveless concerts and decided I was going to move to Nashville. Right now, my dreams are as big as when I was naïve enough to really dream them."

Produced by Jay Joyce [Little Big Town, Eric Church], Big Day in a Small Town tells the stories of the football star, the father, the homecoming queen, and the hairdresser because those are the stories and people that Clark grew up knowing. "All these songs, there's some little truth in them, somewhere, that resonates with me or that is about me," she confesses. Explaining the genesis of "Soap Opera," she offers, "When I would get worried about what people thought of me or what was going on with me, my mom would always say, 'You know, we're all the star of our daytime drama. We're just bit players in someone else's. Nobody cares that much about what's going on with you. They'll only care until there's something juicier going on with somebody else two weeks later.'"

But Clark cares enough about all of these characters to tell their stories: the aging beauty of "Homecoming Queen" who wonders what happened to the life she always wanted... the tempted exes of "You Can Come Over" who do all they can to not get burned by the flame that flickers between them... the heartbroken heroine of "Daughter" who wishes a bit of karmic justice on her ex in the form of a daughter who's "just as sweet as she is hot"... the defiant wild child of "Girl Next Door" who refuses to fit her lover's misguided notion of womanhood.

"'Homecoming Queen' is really real for me — I know that girl. 'You Can Come Over' is very real for me and 'Daughter' and 'Soap Opera'..." Clark's voice trails off as she thinks about the tales she tells. What about "Drinkin' Smokin' Cheatin'" with its pondering of ways to navigate the sometimes rocky waters of a relationship? Game plan? Wish list? "That's a total daydream," she says with a laugh. "I think we all have that daydream."

One of the most heartfelt moments on Big Day in a Small Town is the one that closes it, "Since You've Gone to Heaven." The song addresses the aftermath of losing someone close to you and it's one that Clark has wanted — and attempted — to write for years. "My dad was killed in a work accident the July before 9/11," she says. "When all that 9/11 stuff was going on and everyone was glued to the TV ... I thought right then, 'Since you've gone to heaven, the whole world has gone to hell.' But I sat on it for years and years because it seemed so bleak." As with all of Clark's compositions, there's some truth in it, just not necessarily the whole truth. "It's definitely not the story of my family in that song. I'll stress that," she says. "But I do think, a lot of times, when somebody dies, it blows things apart more than it brings things together."

While the lyrical themes echo those of 12 Stories, Clark pushed her vocal and musical boundaries on Big Day in a Small Town. Instead of building the songs from a simple guitar/vocal performance, Joyce brought the players in for five days of rehearsals before tracking live with the band. "A lot of those rehearsals became what the record was," Clark says, explaining that the recorded version of "You Can Come Over" includes her one-take, scratch vocal. "I wanted to fix a few things, but Jay wouldn't let me because he felt like it would lose emotion. He's about the heart of music. He's not about making it perfect."

"He is out to serve the artist and the song," she adds. Throughout the process, Joyce insisted that this be a "Brandy Clark record" not a "Jay Joyce record" because she was the one who would be performing it night-after-night even as he moved on to his next project. "If I didn't like something, he'd be the first person to change it. I think this project means nearly as much to him as it does to me."

Though Neil Young's Harvest was the only musical reference point the two discussed before heading into Neon Cross Studios, Clark and Joyce each brought their influences along — including Clark's long-standing love of classic country and Joyce's well-documented affinity for edgier rock. "He and I definitely come from different places, musically, which I think is probably good," she offers. "On 'Daughter,' he started to play an organ part and I said, 'That sounds like [Patsy Cline's] "Back in Baby's Arms."' He said, 'What's that?' He didn't know it."

Along with Sturgill Simpson, Ashley Monroe, Chris Stapleton, and Kacey Musgraves (who provides guest vocals on "Daughter"), Clark is part of a new vanguard in country music — one that tips a hat to tradition, while not eschewing its evolution. "I see what's happening right now and I feel this groundswell of people who love... I would say 'country' music, but I'll take it a step further and say 'real' music. I feel like there are people who are starved for that," she says. "The only music I've ever made is country music. The only music I've ever really listened to consistently is country music. And I want to keep that alive, so there's a responsibility in that, for me."

But, for Brandy Clark, that responsibility is a dream come true.